What I read in November

It's time for my monthly summary of what I've been reading and writing about over at Marie's Book Garden. I spent much of November savoring my second read of Harry Potter and the Deathly Hallows in preparation for the movie coming out. I think it's my favorite of all seven books. I'm excited that my nephews are starting to read them now!

Early in November I read Back Roads by Tawni O'Dell (two stars--dark and depressing). Next was 8-1/2 Steps to Writing Faster, Better by Daphne Gray-Grant (four stars; a great cache of writing tips!).

Another four-star book was Babyface: A Story of Heart and Bones, by Jeanne McDermott, a beautiful memoir of a mother's love for her disabled son.

A few days ago I finished the disappointing

Serious Men by Manu Joseph. I give it one star primarily for its sexism but also for its meandering text and lack of fulfilling its potential.

I also mused about upcoming movies based on books and most subversive children's books. I wrote again about our family's love for all things Potter and 15 writers who have influenced me.
It's time soon to compile the best books of 2010--so stay tuned! What good books have you read this year?
Posted by Marie at 5:45 PM No comments:

Nicholas has informed me that he doesn't like kisses any more--only hugs. When asked why not, he says he doesn't want to get wet! Of course, this has made me ever more determined to shower him with much sloppier kisses!

He must not be a true Oregonians, because they don't mind getting wet.

Today is a typical fall/winter rainy day. Not a torrential downpour, but steady falling rain.

This morning on my commute I saw 40 or 50 people walking or biking. Maybe five of them had umbrellas. Most wore hoods or hats.

As for me, I neglected to look at the weather forecast before leaving the house. I was wearing a leather jacket with a scarf (which I put over my head while walking from car to office).

Because umbrellas are a pain in the neck and to be avoided unless you REALLY have a hard time getting wet. Like a 4-year-old little boy.
Posted by Marie at 5:24 PM No comments:

I've had a bad cold for well over a week now and am getting really tired of it! It doesn't help that our Nick has been sleeping really horribly lately, and even though my lovely husband has been shouldering the majority of the burden, he's waking me up as well. He is holding on the last vestiges of babyhood in two essential ways, one of them bad sleep habits! Typical youngest child? I don't know...you tell me!
Fortunately our Thanksgiving plans always involve going to my aunt and uncle's house in Lake Oswego. Our contributions were a vegetable (green beans with onion, crimini mushrooms, garlic, and basil) and a bottle of wine. Easy peasy! The food was marvelous and the company even better, although we were a smaller gathering than usual.﻿

Uncle Jerry lives in Seattle, and he and his family usually come down for Thanksgiving--we miss them at Christmas. Growing up, Nadine and I had a special relationship with Uncle Jerry and his wife Judy--they took a special interest in us. Both of us worked as nannies for them during the summer--Nadine when their daughter Anne was a baby, and me for two summers--when Elena was a baby, and again when she was 1 and Anne was 3.

Definitely the highlight of my Thanksgiving was catching up with Anne and Elena. After most of the guests had left, we hung out and watched "Avatar" in my aunt and uncle's little home theater, while Mike and Nick were being social. 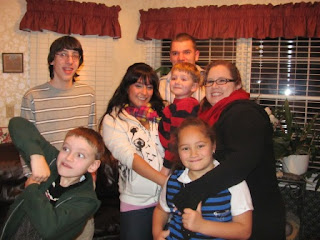 Of course, seeing these sisters together made me miss my own sister...they spent Thanksgiving in Puyallup with David's family. But we will see them next week when we celebrate my nephews' December birthdays.

I've been feeling daring because I've started playing Christmas music. Turns out I'm behind the curve ball; the neighbors across the street have their Christmas tree up, and Nick is insisting that we must get one immediately!
Posted by Marie at 8:51 PM No comments:

Last year I practiced the Facebook tradition of writing one thing I am thankful for each day of November. Then I posted my collected thanks for 2009. I suspect my list will be similar this year, but I'm not going to go back and consult it beforehand. Here is my stream-of-consciousness, although more abbreviated, list for 2010, in no particular order:
Happy thanksgiving, everyone!
Posted by Marie at 12:19 PM No comments:

Here is a brief clip of Dr. Seward with his patient in the mental hospital:

And Dr. Seward proposing to Lucy:

At the end of the show, the kids did the Thriller dance:

The kids did a great job! We had a turkey dinner (pre-Thanksgiving) with everyone that evening to celebrate.
Posted by Marie at 5:55 PM No comments:

On November 22, 2001, an adorable, sweet little boy became an angel. Zacary was born with VACTERL Syndrome (which involve a heart defect among other things). H﻿e was 4-1/2 years old when he died...way too young.
The first time I met his mom, Laurie, was at a Family Advisory Board meeting at the hospital. I will never forget hearing her describe how she had endured something like nine miscarriages and two tubal pregnancies before getting pregnant with Zac. And even that pregnancy was not without its problems. At the beginning of the pregnancy, her HCG did not go up like it was supposed to, and the doctors were convinced she'd lost this baby too. But Zacary was determined to come forth into being.
When he was born, the medical staff noticed that he was missing a thumb (an indicator of VACTERL syndrome) and immediately whisked him away. They announced that they needed to take him to Emanuel to the Level 3 NICU, where he would receive the care he needed. Laurie jumped out of bed (remember, she had just given birth moments before) and announced that she would be accompanying him. Throughout Zacary's hospital stays, Laurie never left Zacary's side. She simply informed the hospital staff that they would need to find a place for her to stay. I was awed by her strength and fortitude--it would never have occurred to me to do something like that!
Laurie was pureminded in her passion and love for Zacary. The devotion was completely mutual, too--you can see from the photos below how much he adored his mama.
﻿Laurie knew firsthand how terrifying it is to be a parent with a baby in the NICU. She spent countless hours supporting other families in the hospital...sitting with them, supporting them, and giving them hope for the future. She was such a gift to these families.
Zacary's heart was so big, and it gave out on Thanksgiving Day nine years ago. The night Zacary died, the nurses from the NICU called us at 3 a.m. to tell us the news. We arrived at the pediatric ICU to see Laurie and her husband Derek holding a limp, silent Zacary in their arms, shellshocked by their sudden loss. That night will be forever seared in my memory. No parent should ever have to mourn their child--especially such a young one.
The days and months that followed were agonizing and awful for everyone who knew them...and the memorial service was heartbreakingly beautiful and sad. Zacary touched so many people's lives. I will always remember his impish sense of humor and love of life. He loved to draw and paint. He adored ladybugs and marshmallows...to this day, whenever I see a ladybug I believe it's Zacary sending me a message from heaven. To this day, when Chris hears a song from "John Denver and the Muppets," which says "Merry Christmas, little Zachary"...it makes him cry and remember Zac. (Chris was 5 when Zacary died, and they were buddies.)
From Laurie--as well as my close friends Kristin and Roger and Catherine and Doug--I have learned how to honor children who have died before their time. I have learned that no parent ever recovers from this kind of loss. I have learned that it's important to treasure every day with our children, no matter how difficult it might be.
I have learned to keep things in perspective. Nick accidentally broke our toilet the other day. The tank top was not fitted on all the way, and he climbed up on top of it (I had stepped away to get a towel!). It crashed down onto the toilet, splitting the tank lid in half and cracking the toilet. But even though it is a $300+ toilet, such a thing or scratches on our newish leather furniture...none of these are truly important if we keep things in perspective. It's not worth losing my temper over something so minor, knowing that others would give anything they had for another moment with their beloved child.
Today I am conscious of the fact that I have a four-year-old sweet boy myself. I am remembering that sweet little Zacary and thinking of Laurie (who marked the day by visiting the beach and writing him a message in the sand)...and all parents everywhere who have lost a child too soon. I know he's looking at his friends growing up and smiling...wishing he were still here with us.
Posted by Marie at 8:29 PM 6 comments:

One of my favorite things about this time of the year is Christmas music. It's my holiday weakness. I wish I could play it all year long, but I don't allow myself to start playing it until the week of Thanksgiving.

Some of my favorite Christmas albums are ones I've bought fairly recently:

And then I have some older favorites:

And now I have three new ones I bought this month--by some of my favorite musical groups/artists! They arrived the other day and I'm just beginning to get a chance to play them.

For a taste of Annie's album, check out her Dickensian video of "God Rest Ye Merry Gentlemen."
Posted by Marie at 6:05 PM 2 comments: