O Susanna? No more working on the railroad... 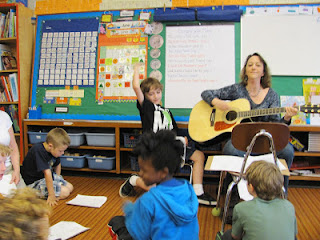 When Kieran was in second grade, his elementary school eliminated music from its programs. I began volunteering to teach music in his classroom, and I continued for many years until Nicholas finished third grade. Two of the classes' favorite songs were "O Susannah" and "I've Been Working on the Railroad." They are easy songs to teach and sing, but I had no idea of the background.

Yesterday I learned from a Medium article by musicologist Dr. Katya Ermolaeva that both of these popular American folk songs, along with "Camptown Races," were minstrel songs.

"Blackface minstrel songs, the racist relic right under our noses, must be recognized for what they are and removed from schools if we want to move forward toward justice and equity as a society."       --Dr. Katya Ermolaeva

I learned that Mickey Mouse originated from a minstrel character. And that minstrel players played the banjo to caricature Black musicians (the banjo was brought from Africa). And that Dinah, as in "Dinah, blow your horn" was a 19th-century generic name for an African-American woman, based on the slave cook Aunt Dinah from Uncle Tom's Cabin. "I've Been Working on the Railroad" has been whitewashed through history, as Dr. Ermolaeva explains in detail.

After reading this excellent article, I did a bit of research on "O Susanna." The nonsense lyrics fit into the caricatures of Black people in the minstrel shows and popular culture at the time, with more banjo playing.

I was horrified to learn that the original lyrics in "O Susanna" included the n-word...as in "De lectric fluid magnified, And killed five hundred n-----." 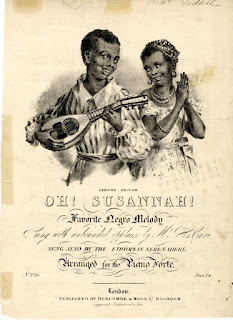 Two more of Foster's songs used the n-word ("Old Uncle Ned" and "Oh! Lemuel"). Harry C. Browne made one of the first recordings, using the original "killed five hundred n-" lyrics, in 1916, along with other racist songs, including "N-- Love a Watermelon Ha! Ha! Ha!." Over the years, the words morphed from the minstrel caricature dialect into popular music, similar to "I've Been Working on the Railroad.

Surely "Buffalo Gals," another favorite of the kids, was safe? No sirree! "Buffalo Gals" was another minstrel song, written as "Lubly Fan" in 1844 by the blackface minstrel John Hodges, who performed as "Cool White." The song is actually about prostitutes. "Blue Tail Fly" is another minstrel song, and "O Shenandoah" began with a Native American slur.
I am now chastened and horrified to reflect that I sang these songs with impressionable children, without any understanding of their history. It's a reminder to me that every old thing we cherish could use research and reflection to understand it better...and to understand if its origins harmed other people, like these minstrel songs did. And what's the answer? Back to Dr. Ermolaeva:

"Removing minstrel songs from schools will not undo the damage already done by blackface minstrelsy. Their removal, however, would serve as an acknowledgement of the damage wrought by these songs and a pledge to no longer promote that legacy. Our children won’t know the difference now, but one day they will be grateful for our efforts to rid their classrooms — and their childhoods — of racist songs that were once powerful instruments of oppression."


We have a plethora of songs to choose from, and we do not need to sing songs with a racist history. When I know better, I do better. Thank you to Dr. Ermolaeva for educating me!
Posted by Marie at 2:03 PM 2 comments: