When Mother's Day is complicated

On the eve of Mother's Day, I am acutely aware of my own mothering privilege.

I am exceedingly fortunate to have a supportive, loving, amazing mom who loved me even before I was born and whose love has never diminished in these 52 years. And I'm also very lucky to have three great kids who love me and tell me so every day!

One Mother's Day many years ago, a friend spoke truth at our church, where we have a tradition of hearing from mothers or children on that holiday, and bravely told us about how she disliked Mother's Day because of her own difficult relationship with her mother. It was raw, honest, authentic, and real. So many of my friends are in this situation. It was a great reminder that this day is not all roses and Hallmark cards.

I've had my own share of hard Mother's Days. Like my first Mother's Day, when we finally took our fragile 24-weeker out in public to church. We'd waited until winter had passed and he was less susceptible to catching respiratory synctitial virus, which could kill him. We were so happy to introduce him to our church friends. But I remember the brunch at my parents' house, when I was trying to get him to eat. I was in tears, and he was in tears. He suffered from reflux, so eating was probably painful and uncomfortable with him. But I felt intense pressure to pack calories into him. I was deathly afraid that he would be labeled "failure to thrive." Not the best memories from my first Mother's Day! And then there were more difficult Mother's Days during my season of losses through miscarriage, when I wondered if I'd ever be able to carry a child to term.

Ever since infertility and coming to know parents who'd lost children--and also knowing many close friends have difficult relationships with their moms--I've become sensitized to the complexity of Mother's Day. So here's to all the people who will not be sending or receiving happy Hallmark cards on this holiday: 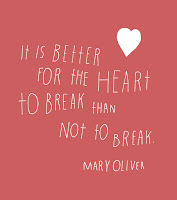 You are loved, you are valued, you are worthy. I am holding you all in my heart as you endure this difficult day. 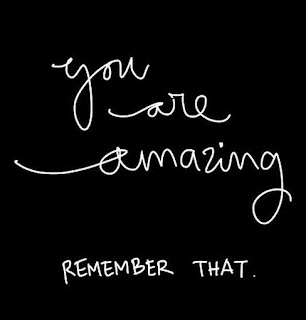 If your baby is going to die, it shouldn't matter how much money you make

Jimmy Kimmel redeemed himself after that awful hosting gig at the 2017 Oscars, where he made fun of people's names (all people of color) and thought it would be funny to lift up Sunny Pawar, star of "The Lion" like he was in "The Lion King." Last night he gave the monologue of his life, the most tender and sweet one I've seen on late-night television (video at the bottom). 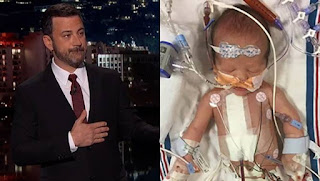 Last week his wife gave birth to a baby boy, William (Billy). Three hours after Billy's birth, a nurse noticed that he had a heart murmur and was slightly purple. She quickly sprung into action and soon they discovered that he had a heart defect. Kimmel recalled how the room soon filled up with people, all trying to figure out what was going on with Billy. (And boy can I ever relate to that!) He had to have the first of what will be several surgeries to repair a valve in his heart.

As Kimmel is telling this story, he tears up not once, not twice, but several times, which of course makes me tear up too. Because it takes me back to the NICU and the terror of not knowing if your precious baby will live or die. And I'm sure my wonderful husband can relate to this: "It's a terrifying thing," Kimmel said. "You know, my wife is back in the recovery room, she has no idea what's going on and I'm standing in the middle of a lot of worried looking people--kind of like right now--who were trying to figure out what the problem is."
He cried again when he thanked all the people who surrounded his family with love and care...again, something I could relate to so well. Never have I felt so loved than when our first son Chris was in the NICU for 117 days back in 1996. We didn't have to cook for ourselves that entire time because of the meal train. We had enough flowers to open a florist shop. And we learned quickly who our truest friends were...they were the ones who surrounded us with hopeful messages, prayers, and constant caring.

And what's most beautiful about Kimmel's story is that he understands the privilege he has...of being a celebrity and receiving the best medical care possible for his son. And he outs that privilege by advocating for health care for all. We also were very lucky. Through my private medical insurance, Chris' NICU and followup costs were covered. In fact, we only had to pay $200 for an apnea monitor. Now we'd have to bear a lot more for out-of-pocket costs and premiums, but in the 1990s my medical coverage had only $200/year premium. I can't imagine how much NICU care costs nowadays! 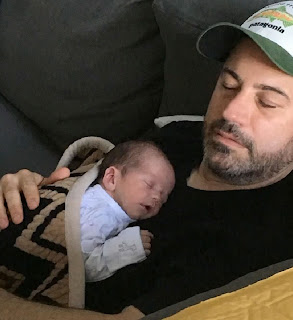 He called out Trump's proposed $6 billion cut to the National Institutes of Health budget, and praised Congress for deciding "to not go along with that." (Even though this could very well change in the next budget.) "They actually increased funding by $2 billion and I applaud them for doing that," Kimmel said.

Kimmel also praised the Affordable Care Act (Obamacare) because our medically fragile babies are born with "pre-existing conditions." Under the Republican plan, they could be turned down for health insurance.

He urged Americans to hold elected officials accountable for their decisions on health care: "If your baby is going to die and it doesn't have to, it shouldn't matter how much money you make," he said. "I think that's something that whether you're a Republican or a Democrat or something else, we all agree on that, right?"

Watch the video yourself and cry along with me!