I Was a Stranger Lenten Challenge 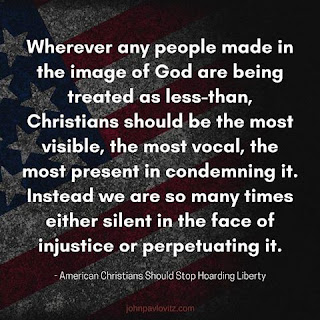 In previous years I've done the Blogging A to Z in April. This year I'm going to do a Lenten Challenge. Each day of Lent, I will read a Bible passage that speaks to God’s heart for those who have been displaced or marginalized, and then read or listen to the words of someone whose voice is not heard...and try to share it here. (Here's a bookmark that will help.)


During these unjust and unloving times in the U.S. and elsewhere, my heart is breaking as all too many Christians look away while people with less power are being cast out and fearmongering is rampant. Every day, we read of more horrors...terror at mosques, synagogues, and schools...violence against innocent civilians, like the Indian engineer killed in a Kansas bar...a Canadian citizen turned away at the U.S. border after agents found Muslim prayer videos on her phone…a Mexican woman, who has lived in the U.S. since she was 14, torn away from her two U.S.-born children and deported…swastikas painted in the NYC subway and even in the liberal city of Eugene…sexual assault victims daily triggered by our administration…and Black lives that don’t seem to matter. Meanwhile, many white Christians refuse to stand up for the downtrodden, supporting a Muslim ban and an expensive wall, and displaying a disregard for ethics and integrity. But what would Jesus do? He would listen to those on the margins. This is our call to fast in a new way. 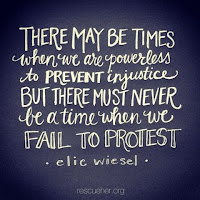 Each day during Lent, I commit to read an article or watch a video by someone whose voice is not often heard. African-American, Mexican, lesbian, gay, bisexual, transgender, intersex, Syrian, Iranian, Iraqi, Turkish, South American, the differently abled, Sikh, Buddhist, Jewish, the overweight, those who suffer from mental illness, refugees, and immigrants. (Add to my list if you can!) The first step to removing the chains of injustice is to take off my own blindfold, listen to those voices, and fight to undo their yokes.

Please consider joining me and sharing what you learn! And thanks to my friend Susan for sharing the "I Was a Stranger" tips!
Posted by Marie at 10:53 PM 2 comments:

Here I am, age 18 in 1982. It was my family's first trip to what's come to be our beloved Holden Village, a Lutheran retreat center in a remote mountain community in the Central Cascades Wilderness. I had just graduated from high school and was about to head off to PLU for my freshman year.

The village was full of teaching staff who were focused on the nuclear arms race, which was a pressing concern in 1982. President Reagan would be re-elected in a landslide that fall, and he was all about "peace through strength," the "Star Wars" program, and nuclear proliferation. The USSR was the evil empire. As this New York Times article testifies, children (and adults) were highly worried about nuclear war. Our media was filled with books, movies, and TV shows about the nuclear holocaust.

My most vivid memory of that week at Holden was deep-seated fear about the future of the world. I had read The Hundredth Monkey, a parable by Ken Keyes Jr., about the devastating effects of nuclear war on the planet. At the young age of 18, I convinced myself that I didn't want to bring children into a world of such uncertainty and danger.

But over the years, things improved. The cold war thawed, and future presidents seemed less prone to threatening nuclear catastrophe. Countries collaborated to create multilateral nonproliferation nuclear treaties. I began to relax a bit more. The nuclear threat did not go away, but it was less of a huge fear for me...even after visiting Hiroshima in the late 1980s. And as you know, I went on to have three children. And I have not been terribly worried about them being drafted into military service and being sent off to war. Until now.

Yesterday in the charade that passed for a press conference, "President" Trump lightly threatened a little nuclear holocaust. At the same time, he's destroying years of gentle diplomacy in highly volatile parts of the world, fanning the flames of terrorism by disenfranchising and badmouthing the Muslim religion, rejecting the "least of these" at our borders, fearmongering, bullying and insulting people left and right, and thumbing his nose to the rest of the world. While he is in Putin's pocket, at the same time Putin is pushing his luck to see how far he can go until Trump explodes. It's terrifying.

And for the first time since I was a teen, I'm scared of the nuclear threat once again. It's more powerful than ever, as Trump taunted. A nuclear war could decimate hundreds of cities around the world and put any survivors into a horrific world like the ones I've read about in my dystopian novels. I think I'd rather die than endure that.

And it was mere weeks ago when these people lived in the White House: 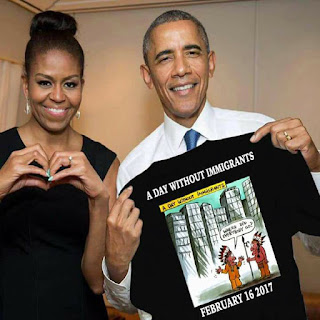 Praying that we all survive this dictator wannabe and his trigger-happy threats.