My heart just burst a little...

Today 8-year-old Nick came home from school with this note: 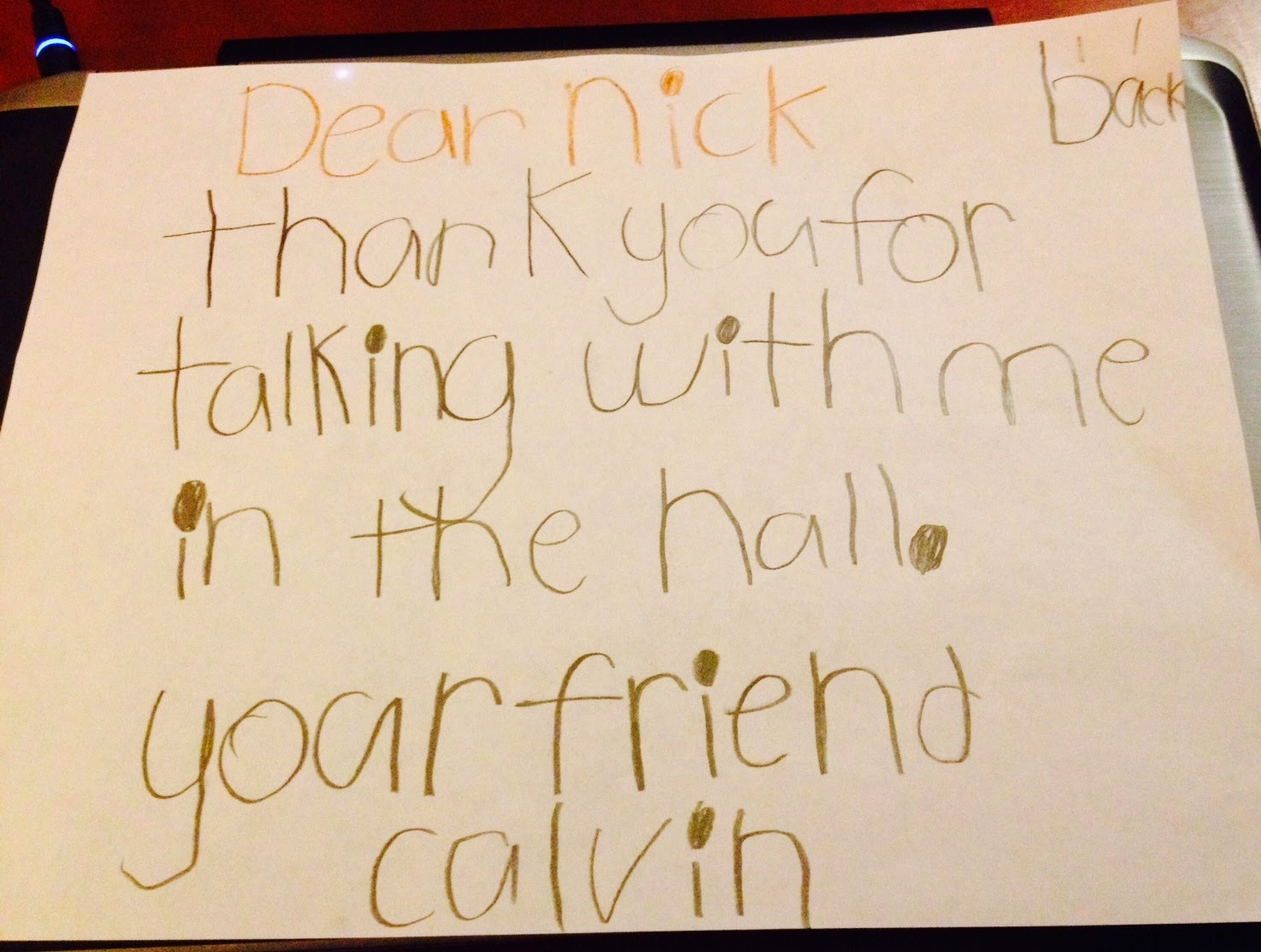 It turns out that his friend was feeling discouraged about his soccer skills, and Nick took the time to encourage him. And Calvin, in turn, made him this note. 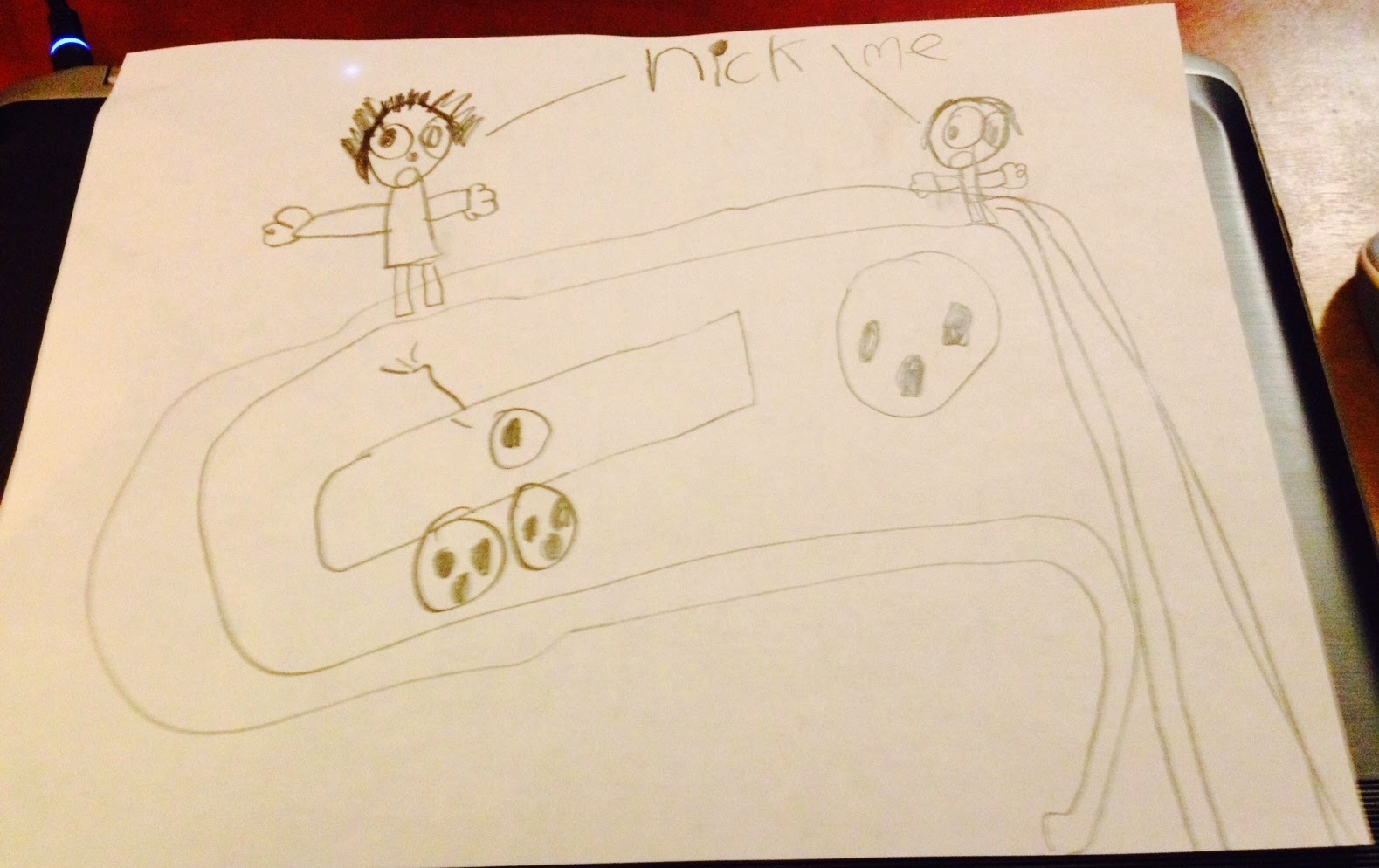 The other day Nick had his best friend spend the night (late opening). I love watching these boys interact with each other--they can never get enough time together. This is the way I feel about my close women friends! They love each other and at this age are not afraid to express that. Of all my sons, Nick is the one who forms the closest friendships with other children. He is my tender one.

As a female, close friendships are so integral to my life, and I'm keenly aware of the messages boys receive as they grow up. I think homophobia smothers close male friendship. I hope it is different for my children's generation.

I told Nicholas that this note meant more to me than a stellar report card...because he's a kind person and a good friend. Heart bursting!
Posted by Marie at 6:36 PM No comments:

Kieran learned this week that he landed the role of Kurt in Jackson Middle School's production of "The Sound of Music Jr."

When I was in third grade, I wanted to change my name to "Maria." Back in the old days, we could watch "The Sound of Music" only once a year, when it was aired on TV. I've watched it outside in the open air one night at Holden Village, and I've cried through the singalong version at Jesuit High School. As a young boy, Kieran also loved this movie.

For his sixth birthday, he wanted to have a Sound of Music party. I even bought lederhosen and a dirndl (for me)! It was a great event. He was obsessed with Kurt, his favorite character. As I wrote back then,


I was hoping to use a much more colorful photo for the cake...but Kieran insisted on this one, because it shows Kurt and Friedrich in their lederhosen!! As I was decorating, Kieran kept bumping me, and I told him he'd better be careful or I would end up writing "Kurt" instead of "Kieran." Of course, he was delighted with that idea...so there it is. 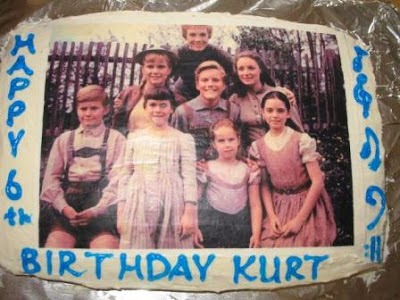 So we were all excited when he got cast as Kurt...although he wasn't planning to audition until his phenomenal choir teacher begged him to (she's codirecting with the drama teacher). It's hard to follow his amazing Mary Poppins experience.

Early reports are that middle school drama is VERY different from his professional experience at NWCT. They had the first read-through on Tuesday, and he was disappointed that people were not taking things more seriously. So we are crossing our fingers that this experience works out for him!! At the least, I'm hoping he becomes friends with more drama- and music-minded kids at his school...and the school's music and drama program were a major reason why we wanted him to attend this middle school.

He's also participating in one last season of NWCT's Kids Company Northwest, his fifth time, while preparing to audition for more mainstage roles next year.

Enjoy these throw-back photos of Kieran's Sound of Music party in 2009, or read the story here. 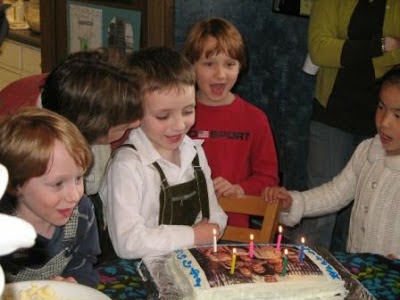 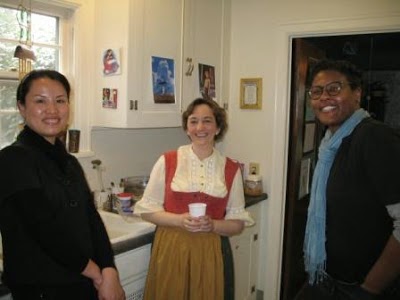 If you reach for the heavens, you'll get the stars thrown in

When did I know that he would be an actor? Probably at age three, when he declared he was having a Wizard of Oz party for his fourth birthday and he would be the Wicked Witch. We re-enacted the movie in condensed version! The sixth one was the "Sound of Music."

He's been seeing theater since he was little...raised on the Ladybug Theater, NWCT, and Chris' various school plays. As soon as he was old enough, we got him into after-school theater programs.

But it wasn't until 2010 that his career aspirations were cemented. That year, he participated in two summer drama camps and discovered his deep love for the stage.
Then that fall he was cast as the only lead actor in Jane Theater Company's production of "Frankenstein: the Little Monster," a British-style pantomime. At age 8, he performed 25 performances over 5 weeks, not missing a one. We drove across the river to SE Belmont five days a week for one month, and three days a week for the performances. It was a great experience for him, but challenging in many ways because he was the only child in the play. 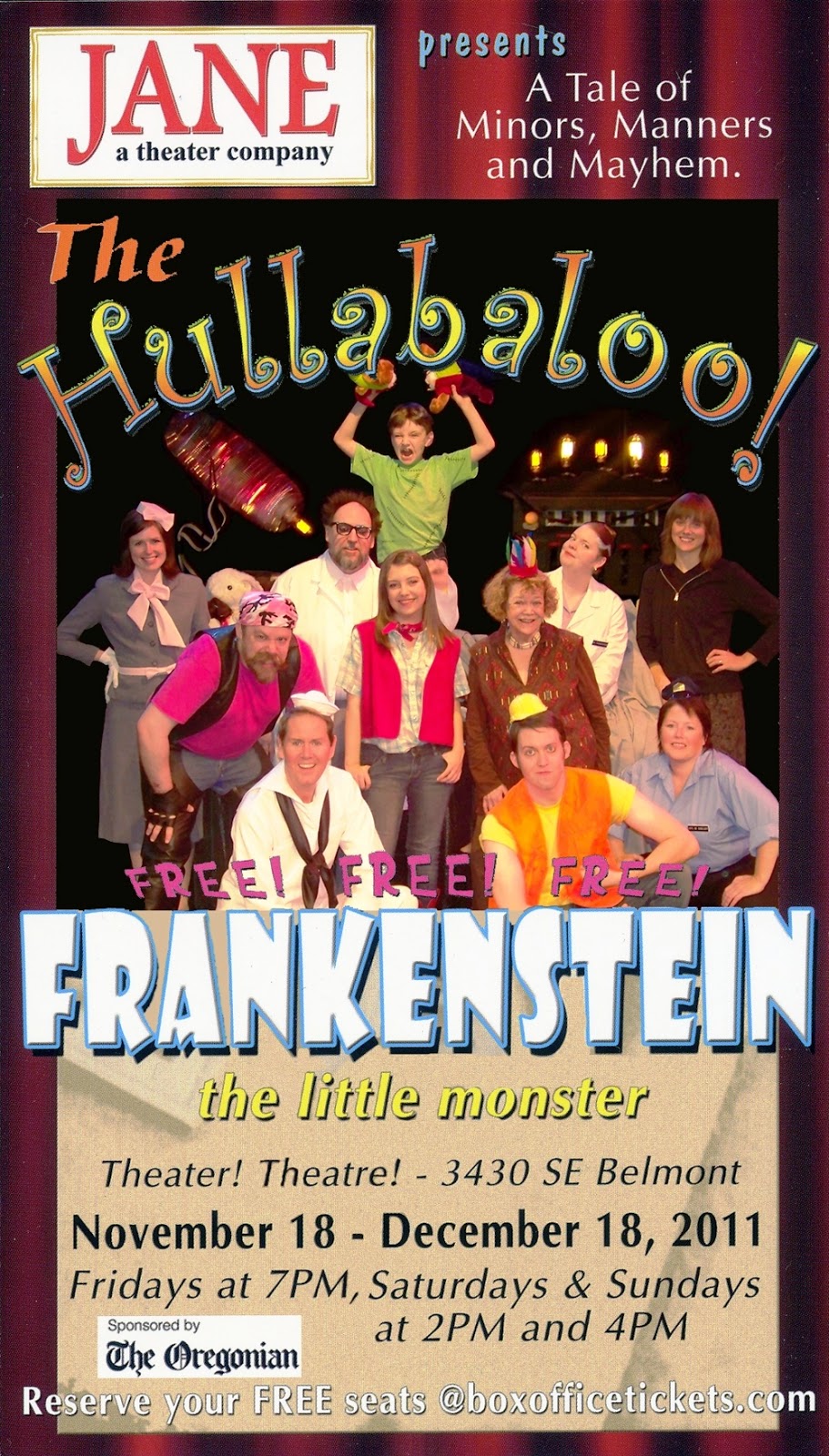 For years, it's been Kieran's dream to get on the mainstage at NWCT. He began auditioning a few years ago, and for four seasons he's been in their touring company, Kids Company Northwest.
In the meantime, he has been a regular at most of the NWCT shows.
As soon as he heard NWCT would be doing Mary Poppins in 2014-2015, he set his eyes on the role of Michael Banks. Much of the Broadway musical is online on Youtube, and he memorized everything he could find. So we were all excited when he landed the role: finally, the mainstage, and with a lead role!


What a thrill it was to see him onstage! He had the time of his life. Every day Kieran was not at the theater, he was at a loss. Kieran's Jane is now his best friend, and he also formed bonds with many other actors (including the amazing Chrissy Kelly-Pettit, who played Mary Poppins).

We've seen a lot of theater in Portland--both children's and adult--and this show was phenomenal. The singing, dancing, and acting were fantastic; costumes gorgeous; and production elements amazing. I cried during every show. Such a stage mom! (In fact, I'm not really--later on I found out that most of the parents saw the show so many more times than I did!) It was NWCT's most successful production to date--they sold out every show, and when they added an additional show, it sold out almost immediately. In total, 20,000 people saw the show!

We were also really impressed with the organization itself--rarely were they let out of rehearsals late (this is a pet peeve of mine as a theater mom!) and communication was great. I also appreciated the way they protected the child actors. Every adult actor has a background check, and they have separate dressing rooms. The kids were not allowed to leave the theater between shows.

The roles of Jane and Michael were double cast, which alleviated the commitment over the holidays a bit. (Kieran would have preferred to be in every performance, though, because he loved it so much!)

Kieran's known of NWCT's artistic director Sarah Jane Hardy for years...in fact, many years ago he wrote her a letter asking her to produce "Into the Woods"! So it was a thrill for him to be able to work with her at last! And working with the phenomenal John Ellingson (Bert) was also exciting.

He was SO SAD when the show was over, and he's anxious to get back on the mainstage again next season--fingers crossed!

Here are some photos purchased from David Kinder, NWCT's photographer.


When the show was over, the entire cast had a (sparkling cider) toast together, and the Janes and Michaels took this great photo: 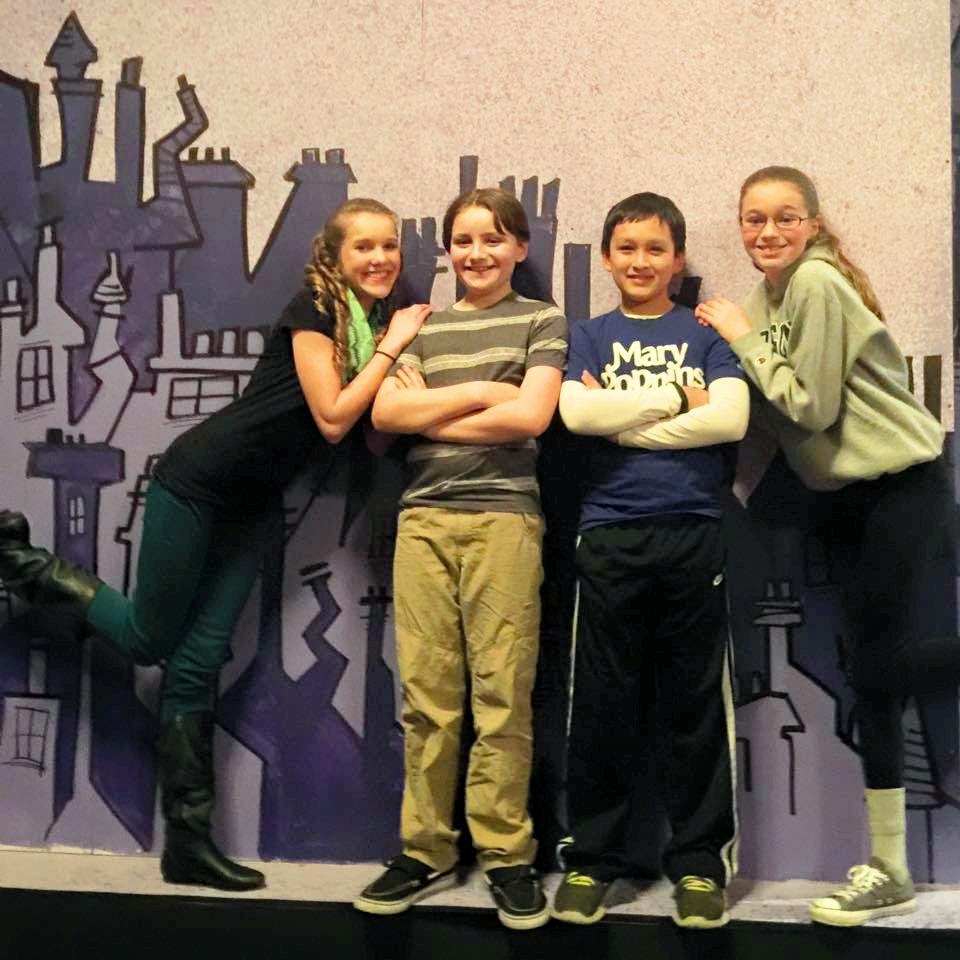 Thanks to all of you who came to see Kieran in "Mary Poppins" (more photos on Facebook)! He had a great fan base, and we are so grateful for your support!
Posted by Marie at 5:55 PM No comments:

Here are the best books I read in 2014. Click the title to read my review. They are listed in approximate order of how much I liked them (#1 being the best). I'd love to hear what you thought of any of these books. If you've read any, please leave me a comment.

You can also refer to my best books lists back to 2001 here. Enjoy! This is cross-posted in Marie's Book Garden.

1. Tiny Beautiful Things: Advice on Love and Life from Dear Sugar, Cheryl Strayed
2. I am Malala, Malala Yousafzai
3. Free Spirit: Growing Up on the Road and Off the Grid, Joshua Safran
4. A House in the Sky, Amanda Lindhout
5. My Beloved World, Sonia Sotomayor
6. Lean In: Women, Work, and the Will to Lead, Sheryl Sandberg
7. Strength in What Remains: A Journey of Remembrance and Forgiveness, Tracy Kidder
8. God Is Disapointed in You, Mark Russell (still reading)
9. Believing Cassandra: Getting Beyond the End of the World, Alan AtKisson (still reading)
10. The Lost Child of Philomena Lee: A Mother, Her Son, and a 50-year Search, Martin Sixsmith
11. Japanese Women Don’t Get Fat: Secrets of My Mother’s Kitchen, Naomi Moriyama
12. House of Prayer Number 2: A Writer’s Journey Home, Mark Richard