Blessed are they who escaped the grooming of David Haas

on June 24, 2020
Highly prolific and admired Catholic composer David Haas has been accused of sexual harassment and assault by several women.
The National Catholic Reporter has an in-depth piece on his creepy grooming history, and some of the most damning accusations come from his ex-wife, whom he started grooming when she was just 16 years old.
If you were raised Catholic (22 percent of Americans were), you have most likely sung the hymns of David Haas: 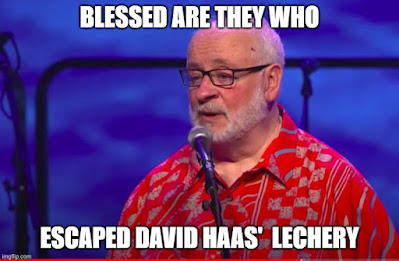 These are just a few of his most well-known hymns...he has also written lots of psalms as well. He is a beloved fixture in the Catholic music world, although conservative Catholics and uptight liturgists call him sappy, a "dissident composer," and "pro-gay," and they are happily reporting his downfall.
As a member of a progressive Lutheran-Catholic church, and as the person who selects the music for my church, I'm feeling thoroughly disgusted and furious that one more man in power has abused his privilege and platform to prey on vulnerable young women.
I cannot say Haas' perversion and assaults come as a complete surprise to me, because I have met him. My friend John and I attended a music workshop he led at the University of Portland a few years ago. It was a small enough group that he had us go around and introduce ourselves. John and I outed ourselves as Lutherans (the only non-Catholics there!) and told him about our one-of-a-kind Lutheran-Catholic church. Haas was supremely rude and dismissive of us, saying that we were NOT the only Lutheran-Catholic community. I seriously found him to be a horrible man, and that whole day it felt like we were in some kind of Catholic cult of Haas worship.
But I have loved much of his music, which often is less patriarchal in language and also full of social justice language (another reason why the traditionalists hate him). When the Beatitudes are in the readings for the day, we always sing "Blest Are They," for example.
The most infuriating thing about these revelations is that the Archdiocese of St. Paul and Minneapolis has known about these accusations SINCE 1987. Apparently he's like the Harvey Weinstein of the Catholic church music circles...many had heard rumors about him, but no one wanted to take him down because he had so much power and influence in the church.

National Catholic Reporter reports that one of his victims said, "The fact that the [expletive] archdiocese knew [of his history] and still let him set up a camp for young people...The amount of hurt and pain that could have been prevented is almost unforgivable..."
"She remembered him being 'a touchy person,' always hugging, making kids 'feel chosen' when he'd place his hands on their shoulder as they sat with their peers...
Haas would lead a big concert at this program once each year, with the students all eager to be front row 'so that maybe they could see and know you,' Megan recalled, particularly the power of him looking at you while he sang the words to his popular song 'You Are Mine.'
Now, whenever Megan is caught off guard and hears one of his songs at a church service, "I have been wrecked, just knocked on the floor."

The organization Into Account, which first released the allegations, reported that "Some women have described romantic relationships with Haas that felt consensual in the beginning, but were then marked by sudden, overwhelming sexual aggression from Haas, in which any resistance was met with extreme anger. Other women have described incidents that we would interpret as outright sexual battery, involving groping, forcible kissing, and aggressive, lewd propositions. The youngest victim reported to us was nineteen years old at the time of the alleged sexual battery, while Haas was over fifty."
This is just one more example of the Roman Catholic church sweeping its perverts under the carpet and failing to protect the vulnerable (Haas apparently targeted teen girls and women who had experienced trauma). Completely unacceptable. We will no longer be singing any David Haas hymns.
Many of the women who have come forward had no idea his preying on them had happened to anyone else. They didn't feel comfortable coming forward out of fear of being shamed or retaliated against. Will we ever have a culture where people feel safe calling out abusive behavior? I'm astonished that his accusers have not all left the Catholic church.
Can you imagine hearing these songs be played in church, knowing they had been written by a man who had forced himself on you? Or seeing him get fame and fortune from his hymns, knowing how hollow the lyrics are?
I often joke saying "some of my best friends are Catholics" (or once were!). I have great respect and admiration for many priests who come to say mass in our community. But as for the Catholic hierarchy at large, I cannot begin to express my disdain at yet one more failure to protect the vulnerable.
music