The Weapons of White Women's Tears

If you're white, stop saying "I'm not a racist."
As whites, we have benefited from the structure of racism and therefore we are all inherently racists unless we consciously fight it every day. The only way we can work toward not being a racist is to be actively anti-racist. Here are six ways to do that.
By now, you've probably heard about the two striking examples of the evils of racism that happened 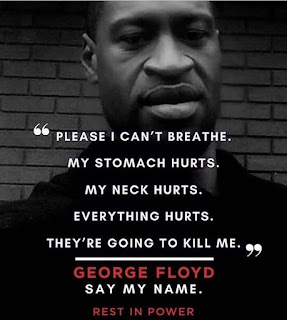 earlier this week...so soon on the heels of Ahmaud Arbery's murder in Georgia and the long-overdue beginning toward some form of justice for his murderers.
At the same time far too many Black Americans are dying from COVID-19 (and being disproportionately affected by the economic damages), now they have to see horrifying images on their social media feeds of a white cop pressing down his foot on a Black man's throat, while his victim says "I can't breathe." His death is a clear symbol of the oppressions of racism...white people with their feet on Black people's necks, suffocating them.

George Floyd, who worked security at Conga Latin Bistro, was described as a "gentle giant." On Facebook, the restaurant posted pictures of Floyd with a caption reading, "We will always remember you."
There's so much to say about his murder (and those of other Black lives violently lost), but I'd recommend that instead you read the voices of Black people such as: 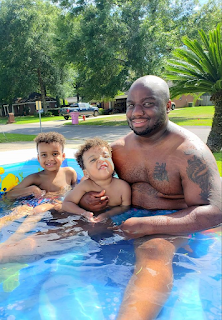 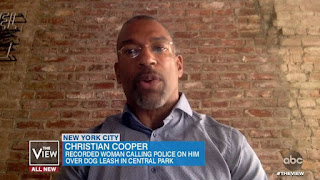 What I want to talk to you about today is the weaponization of white women's tears.
The morning that George Floyd was brutally murdered in Minneapolis, "Central Park Woman" Amy Cooper called 911 because Christian Cooper asked her to put a leash on her dog. Christian is a Harvard graduate, pioneering comic book writer, and biomedical editor for Health Science Communications, demonstrating only that a Black person's qualifications matter not a jot when it comes to racism. On the line with the 911 operator, Central Park Woman's voice ramped up to hysterical as she claimed she was being threatened by an "African-American man." Watch Christian and his sister describe the incident and how it made him feel.

We have got to stop this shit.
Amy Cooper is being called a "Karen," which is a nickname for a pretentious, overprivileged, upper-middle-class, shallow, blonde white woman who thinks the world belongs to her. She might consider herself a liberal and she might even have a few Black acquaintances or friends. Of course, she thinks she is not a racist. How could she be a racist when she voted for Obama?!?!?
For hundreds of years, white women have yielded our power as damsels in distress to endanger and sometimes kill Black people through our claims that we have felt threatened by Black people, usually Black men. Sometimes we white women have even made up stories about Black men threatening or attacking us (e.g., Emmett Till).
The book To Kill a Mockingbird (in which a Black man is put to death for the false accusation of a white woman...more white tears) is celebrated in the town of Monroeville, Alabama. Yet when an actual real-life Black man (Walter McMillian) was arrested for a crime he did not commit (one that was connected to his affair with a white woman), those same townspeople proud of To Kill a Mockingbird conveniently overlooked this connection, overlooked the faulty evidence, and assumed McMillian was guilty. (This story is told in Bryan Stevenson's outstanding book Just Mercy and the movie based on the book.)
The term "white tears" was unfamiliar to me until I read White Fragility by Robin DiAngelo a few years ago.
If we want to commit to being anti-racist, we need to understand the role that our whiteness plays in the structure of racism.
DiAngelo writes that "'white tears' refers to all of the ways, both literally and metaphorically, that white people cry about how hard racism is on us." I see this often played out in social media posts, when white women cannot stand the discomfort from being called out for their racism. DiAngelo shares how it is often manifested:
All of these moves function to get race off the table, regain control of the discussion, and end the challenge to their positions."
By using the deadly weapon of her white tears by calling 911 and claiming she was being threatened when she was just asked to leash her dog, Central Park Woman could so easily have condemned Christian Cooper to the same fate of George Floyd, Amaud Arbery, and so many others.
Stop making it about Amy Cooper's dog or saying she shouldn't have been videotaped or fired. Stop feeling sorry for her. She knew exactly what she was doing. She clearly knew her power.
As white women (and men, too), we need to educate ourselves about our power and privilege, and learn about the ways we tend to go fragile and false victim when we are challenged for our racism. Let Black people go birding, jog, drink coffee, and just live their lives without assuming they're doing something wrong, for God's sake. My sons shared this post today. Let it sink in:
I have privilege as a white presenting person because I can do all of these things without thinking twice:
I can go birding (#ChristianCooper)
I can go jogging (#AmaudArbery)
I can relax in the comfort of my own home (#BothemSean and #AtatianaJefferson)
I can ask for help after being in a car crash (#JonathanFerrell and #RenishaMcBride)
I can have a cellphone (#StephonClark)
I can leave a party to get to safety (#JordanEdwards)
I can play loud music (#JordanDavis)
I can sell CDs (#AltonSterling)
I can sleep (#AiyanaJones)
I can walk from the corner store (#MikeBrown)
I can play cops and robbers (#TamirRice)
I can go to church (#Charleston9)
I can walk home with Skittles (#TrayvonMartin)
I can hold a hair brush while leaving my own bachelor party (#SeanBell)
I can party on New Years (#OscarGrant)
I can get a normal traffic ticket (#SandraBland)
I can lawfully carry a weapon (#PhilandoCastile)
I can break down on a public road with car problems (#CoreyJones)
I can shop at Walmart (#JohnCrawford)
I can have a disabled vehicle (#TerrenceCrutcher)
I can read a book in my own car (#KeithScott)
I can be a 10yr old walking with our grandfather (#CliffordGlover)
I can decorate for a party (#ClaudeReese)
I can ask a cop a question (#RandyEvans)
I can cash a check in peace (#YvonneSmallwood)
I can take out my wallet (#AmadouDiallo)
I can run (#WalterScott)
I can breathe (#EricGarner)
I can live (#FreddieGray)
I CAN BE ARRESTED WITHOUT THE FEAR OF BEING MURDERED (#GeorgeFloyd)
White privilege is real. Take a minute to consider a Black person’s experience today.
#BlackLivesMatter
We need to call out other white people when they weaponize their white tears. We need to read the words of and listen to Black people and demand positive representation. We need to demand justice for our black siblings and pay them for the traumatic act of educating us. And we need to stop centering ourselves and making it about us.
Here are some specific ways you can demand justice for gentle giant George Floyd. Instead of criticizing the rioters in Minneapolis this week, try to understand why they are rioting.
When we know better, we can do better.