Broken down and tired: a lament

on November 14, 2017
Trigger warning: First of all, for all those women, men, and nonbinary folks out there who've been sexually assaulted, harassed, or abused, you are in my heart. This is a bit of a trigger-inducing rant, so bear with me.

Those who know me rarely see me depressed or feeling down. I'm a naturally cheerful, resilient, optimistic person. But this week I am feeling emotionally exhausted and depleted. As a 7 on the Enneagram ("the enthusiast"), depression can hit me, from out of nowhere, like a ton of bricks. I truly hate being depressed, and I'm eager to feel like myself again.

Here's what is wearing me down:
I looked at my sweet little fifth grader last night and wondered, what will this world be like when he becomes an adult? What kind of irreversible damage is being done with this dumb, corrupt, authoritarian, extremely dangerous, narcissistic sociopath sitting in the Oval Office...and even worse perhaps, Republicans in Congress enabling his horrible actions and excusing his words?


In the past week, we have at least some silver lining. Finally, the Republicans are pulling away from Roy Moore. Today, miracle of miracles, Paul Ryan announced that the Congress would undergo sexual harassment training. #itsabouttime But when will they actually believe the MANY WOMEN who have accused the Predator-in-Chief? How is he any different from Roy Moore, except for the fact that he targeted 19- and 20-year-olds? He's still a dirty old man.

Rebecca Solnit's brilliant essay, Let This Flood of Women's Stories Never Cease, affirms that perhaps this is the beginning of the end of not believing survivors. Maybe this drastic pulling off the bandage and exposing the bloody wound beneath the scab will make things better for survivors. Maybe people will start to realize how extremely rare it is for people to lie about these things (only 2 to 10 percent of accusations). I hope survivors keep telling their truths, even though it's incredibly traumatizing for them--and for other survivors like me.

But I will rise up.

Resilience is my new middle name and will be my next tattoo. I know this exhaustion and broken-down-and-tired feeling is temporary. You abusers, assaulters, rapists, and defenders of these villains will not win. Part of my healing is writing this all down. Thank you for listening. 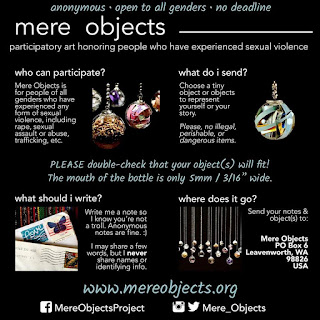 Please join me in dismantling misogyny and rape culture by believing survivors and calling out enablers and accusers. Help stop rape culture now.

If you are a survivor, I'd like to tell you about an incredible art project and tribute to survivors. It's called Mere Objects: Participatory Art Honoring Those Who Have Experienced Sexual Violence. It's free to participate in the project, and I'm still pondering what I will send in.

And I'll leave you with one of my favorite songs, which is giving me hope this week:


Rise Up by Andra Day