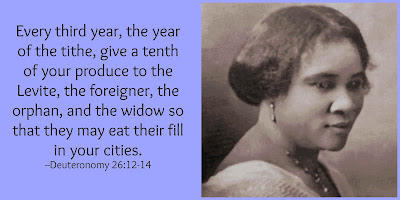 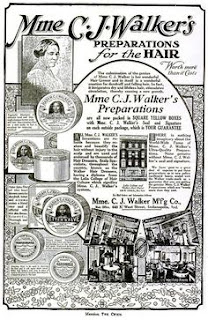 Born in 1867 as Sarah Breedlove, she grew up on the Louisiana plantation where her family had worked as slaves, but the first in her family to be born free. Orphaned at age 7, she was raised by her sister and cruel brother-in-law until she left home to marry. Surviving widowhood and twice divorced, she did not rely on men for her success. While working as a successful sales agent for a hair care company, she married Charles Joseph Walker and decided to begin her own line of hair care products designed specifically for African-American women.

Her first large donation of $1,000 was to build a new YMCA recreation facility in a black neighborhood, explaining, “If the association can save our boys, our girls will be saved, and that’s what I am interested in.” 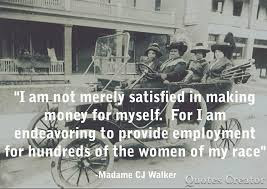 She funded anti-lynching programs run by the NAACP and the National Association of Colored Women. She led the effort to preserve the home of Frederick Douglass in the Anacostia neighborhood of Washington, D. C. And she joined a delegation of Harlem leaders who went to Washington, D. C. to argue that black Americans who fought in World War I should have full civil rights at the conclusion of hostilities. When she passed away on May 25, 1919 from hypertension and kidney disease at the young age of 51, she left most of her estate to charity.

“I am in the business world, not for myself alone,” she told Booker T. Washington in 1912, “but to do all the good I can for the uplift of my race.” In addition to her philanthropy, she employed thousands of African-American women as commissioned, well-paid sales agents. As the New York Post wrote after she died, Walker’s rags-to-riches life demonstrated that the American dream of personal success—and then sharing that success with one’s fellows—applied to blacks as well as whites, and that talented and generous citizens of any color “may rise to the most distinctive heights of American achievement.”

She continues to be an inspiration today, especially for African-American women. And here's a piece of good news: the amazing Octavia Spencer has optioned a book about Walker and plans to produce and portray her in a TV series! I plan to add this book to my list: On Her Own Ground, written by her great-great granddaughter.

Our Lenten hero of the day! Read more of my "I Was a Stranger" entries here.