Me too, and it's #NotOkay

on October 13, 2016
Listening to Michelle Obama's impassioned speech this morning in New Hampshire made tears run down my face. More than anyone else, she is capturing how I feel about this week in politics. The speech is a "must watch" for all women, and for all men who respect and value women. 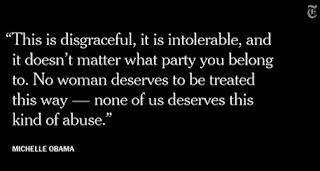 Speaking to a packed auditorium of mostly women and children, Ms. Obama seemed to be holding back tears as she said, "I can't stop thinking about this. It has shaken me to my core in a way that I couldn't have predicted." She honored women everywhere by naming our experiences as painful and hurtful.

I couldn't help but wonder about Michelle Obama's own personal sexual harassment or assault story. We all have at least one (and often several), and many are bravely speaking out at last, sharing their stories. Why do women stay silent? As the First Lady said,


"All of us are doing what women have always done; we're trying to keep our heads above water. Just trying to get through it. Trying to pretend like this doesn't really bother us. Maybe because admitting how much it hurts makes us as women look weak. Maybe we're afraid to be that vulnerable. Maybe we've become accustomed to swallowing these emotions and staying quiet. Because we've seen that people will often not take our word over his. Or maybe we don't want to believe there are still people out there who think so little of us as women. Too many are treating this as just another day's headline. As if our outrage is overblown or unwarranted. As if this is normal."

We are living in a world where this kind of behavior is excused as "locker room banter." Where a woman's looks are commented on, constantly, every day. We all have multiple stories. I am ashamed to admit that I used to watch Trump's horribly sexist "The Apprentice," even though the beginning and the board room segments with Trump were awful. He humiliated women on a regular basis. But because I was trying to pretend that it didn't bother me, and because women become so immune to sexism on a daily basis, I watched it anyway.

Now, prompted by Trump's claims that he has never harassed or assaulted women, his victims can take it no longer. All these brave women coming forward are facing the scorn and accusations from the far right of the Republican party (Trump supporters). New York City Council Speaker Melissa Mark-Viverito felt compelled to share her own story of childhood sexual abuse.

Women are sharing their stories on Twitter and Facebook and in the blogosphere, using the hashtags #TYBraveWomen and #NotOkay. As strong women, we stand together and help each other be brave. These women inspire me to be honest about my own story, which only a few people know. I am another 1/5.

When I was 13 years old, I was sexually assaulted by a stranger. My first experience of sexuality was one of pain, terror, and lasting post-tramautic stress disorder. I am still afraid of dark streets and distrustful of intimidating strange men. This experience is why I cannot abide graphic rape scenes in TV or movies (and why I refuse to watch "The Game of Thrones"). When I was called to sit on a jury for a sexual predator similar to my own (35+ years later!), I had to name my experience in a full courtroom, in front of everyone including the predator. I asked to be taken out of the jury pool, as did other female sexual assault victims, but to have our request honored, we were forced to speak about our awful experiences out loud. When I left the courthouse, I called Mike, completely broken down. I felt shaken for days afterward, and even still now when I remember that afternoon. That's another reason we stay silent.

As many of you know, I'm a confident, self-assured woman. But I have kept this mostly quiet until now, for the reasons Michelle Obama named: fear of vulnerability and being perceived as "less than" or weak. Not to mention the fact that this was an extremely private, traumatic experience in my life. 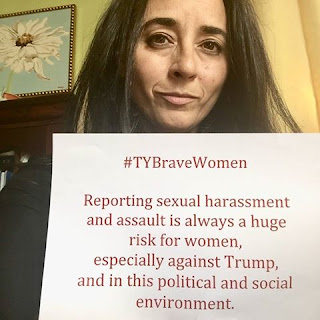 But if other women can face Donald Fucking Trump down in the face, after he assaulted them--in either thought or deed, I can do it too. Now he threatens to sue them all, and in a bizarre strategy that merely amplifies his disdain for women, he says that they were not pretty enough for him anyway.

I am okay, and I am strong. I've surrounded myself with loving, compassionate men (especially my husband!) who would NEVER treat women this way or dismiss this kind of behavior as "locker room talk." The kinds of men that Michelle Obama spoke about:


"I know the men in my life do not talk about women like this, and I know that my family is not unusual. To dismiss this as everyday locker room talk is an insult to decent men everywhere. The men that you and I know don't treat women this way. They are loving men who are sickened by the thought of their daughters exposed to this kind of vicious behavior. These men are worried about the impact this election is having on our boys who are looking for role models about what it means to be a man. Strong men do not have to put down women to make themselves feel powerful. People who are truly strong lift each other up, bring people together." 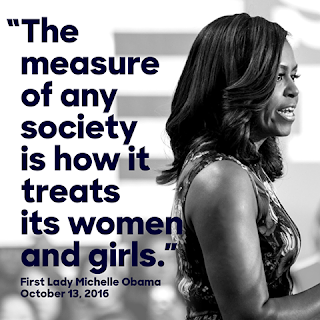 One of the most heartbreaking things about this recent Trump catastrophe is that his supporters are defending his despicable, dishonorable actions, even though he's admitted that he is free, even proud, to sexually assault women. And any man who sexualizes a preadolescent girl OR HIS OWN DAUGHTERS is human filth. I simply cannot believe that people are still defending this man's actions.