Making music with the women at camp!

on April 26, 2010
This past weekend I went to camp with a bunch of women to make music.

About 10 or 12 years ago (I can't even remember how long ago it was), I attended the Northwest Women's Music Celebration, a music camp held annually at the YMCA Camp Collins in Gresham, Oregon. The camp was founded by a great women's folk music band called Motherlode. This year marked their 20th year of holding this camp at Camp Collins. The first time I went to the camp I attended by myself, and the following year I took along my mom.

Then life got crazy with kids, etc., and I didn't go back again until this year...when not only my mom decided to go along, but also two friends! We had a fantastic weekend. In the intervening years, the camp organizers vastly improved the organization and the offerings: more teachers, more classes, and way, way more laughter. I noticed a distinct effort to reach out to newcomers and up the fun factor.

The camp started on Friday afternoon. After registration was the first of many song circles, led by members of Motherlode. (A song circle is a musical gathering where each person takes turns choosing a song.) After the newcomers' meeting (which Mom and I attended since we felt a bit like newcomers ourselves) and dinner was the opening event and a teachers' concert. Each teacher talked about the courses she would be offering and performed. The theme for the weekend was the 60s, and I can't imagine an easier theme--for dress-up, decorations, and especially--MUSIC!

Here are the emcees (and camp coordinators), Sonny and Cher: 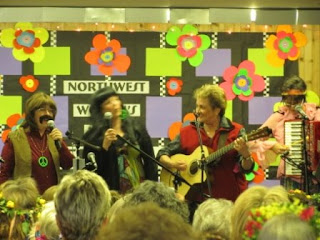 And members of Motherlode, appearing as the Fab Four:

Friday night after the teacher concert we went to another song circle until a little after midnight.
Saturday was divided up into three sessions, with about five or six courses per session. I found it hard to choose which one I wanted to attend! For session #1, I went to intermediate mandolin, feeling a bit nervous about that, since I would call myself an advanced beginner rather than intermediate. However, the two other students were at similar levels of experience. I really enjoyed that class and learned some new tricks. More important, I developed more confidence with the instrument.
For Session #2 I went to a session on Americana music, led by a young woman who is pursuing her master's degree in Appalachian music in North Carolina...and who had an amazing voice. She taught us about a wide variety of American roots music, from the Carter Family to Cajun music and a primitive Baptist hymn. After lunch I went to the Beatles/60s music song circle.
Then we had a bit of free time. Karina and I had signed up for the student concert that evening, so we worked on our song for awhile, and Mom and Lois decided to join us as well. Then Karina and I did some tie dye; I made two t-shirts for my tie-dye-obsessed Kieran.
The concert was the highlight of the weekend. Most of the classes offered a performance--and it was very inspiring to see all these women get up on stage, after having only learned the harmonica/accordion/fiddle/guitar/marimba/drumming, etc., for the first time that day. Many of the acts were moving and serious, while others were drop-dead hilarious. In addition to the musical acts, one woman did a great monologue from "The Vagina Monologues" and a wonderful African dancer (Habiba) did some storytelling.
Here we are, the "Moms of Miracles," singing Susan Werner's wonderful sassy song, "Our Father (Revised)," which the audience seemed to enjoy (unfortunately, you can't see Lois in the photo): 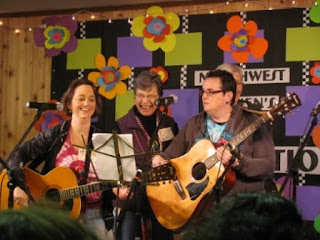 Karina had never sung a solo before, but she sang two verses of the song solo--yay, Karina! 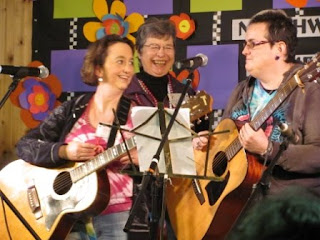 This was a hilarious comedy sketch in which the leader was trying to sing "California Dreaming," and her backup singers were extremely dense...funny! 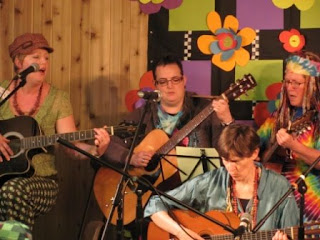 Me with the other intermediate mandolinists (and teacher Gwenlyn Thomas): 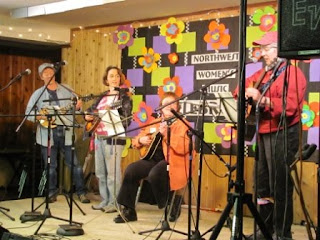 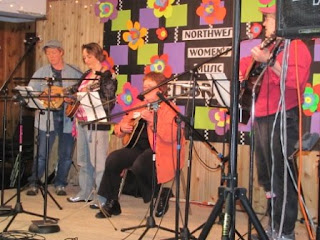 Here is an absolutely hilarious video of the Sarah Palin parody a group of women did at the student concert. I don't remember when I last laughed that hard!!!

Here's my friend Lois playing in the marimba band: 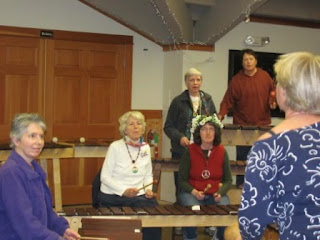 And Mom as a flower child, singing in the Showtunes group (the woman who impersonated Sarah Palin was the Showtunes teacher--she was amazing!). I would have enjoyed that class, but it was offered the same time as intermediate mandolin, and I knew I had to take a mandolin class. 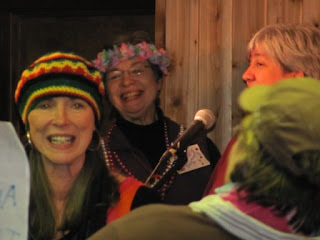 After the concert we did some line dancing to 60s music (including The Hustle!). The next morning after packing, cleanup, and brunch, we had one final session--and I chose beginning marimba. Such a blast! It was the first time I'd ever tried my hand at the marimba, and I think I could really get addicted to it. It's trance inducing! 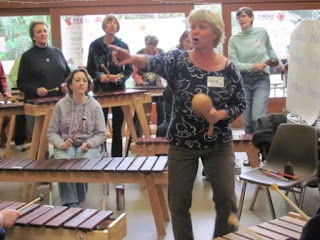 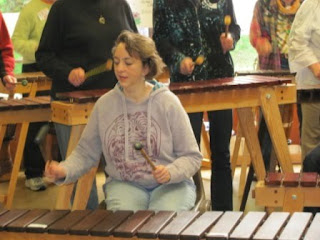 Mom on the marimba: 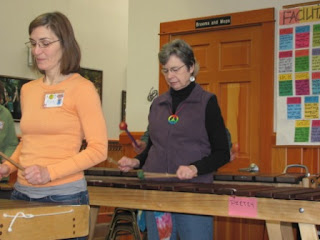 And Lois enjoyed it so much, she took the class again! 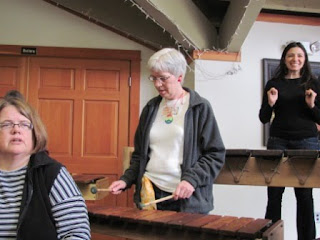 After the final class, we had the closing circle--an emotional tribute to all who helped put the weekend together and the special camp participants. The weekend was often bittersweet and poignant, as one of the members of Motherlode is battling ovarian cancer and is the middle of chemotherapy. It was a true testament to the restorative, caring power of a group of women gathered together, because it really felt like we had encircled her in a healing cloud of love. 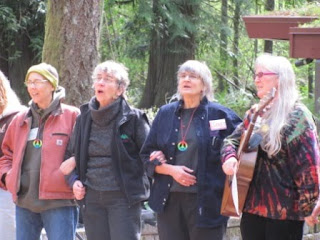 All the "senior" members of camp (women over 65), including Mom.

Here I am with my camp buddies--Lois, Mom, and Karina--it was so much fun to hang out with them and make music with them! 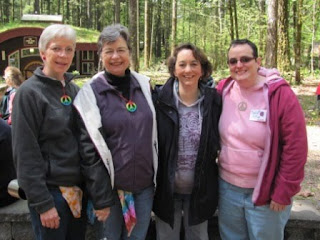 Before the weekend was halfway over, I was already planning my return next year. However, in 2011 the Northwest Women's Music Celebration will be held on Easter weekend. If they are able to hold it from Thursday-Saturday, I'll be there in a heartbeat. Otherwise, I couldn't miss Easter morning with my boys. So I hope that's what they decide to do. The weekend passed way too quickly!
Motherlode music Northwest Women's Music Celebration