East Side Sushi and Mrs. America

I am grateful for streaming services during this coronavirus isolation. We have never had cable, and I rarely watch regular TV. Most of my viewing is online via Netflix or Hulu, and recently I discovered Kanopy, a free streaming service available to anyone with a library card. It has mostly documentaries and independent films, and it's fast becoming my favorite! 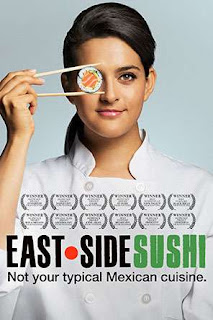 This week I watched "East Side Sushi" on Kanopy, a movie about Juana, a young Mexican single mom who lives with her dad and young daughter. She is trying to make a living in Oakland, California, operating a streetside fruit cart. She has bigger dreams, though, and finds a job working in a Japanese restaurant, Osaka.

The head sushi chef, Aki, soon discovers that Juana has a real talent in the kitchen. She wants to become a sushi chef, but the owner of the restaurant, Mr. Yoshida, is a traditional Japanese man and refuses to consider it. Juana has two strikes against her as a Mexican woman.

One scene in the movie, when Juana gets into a big argument with Mr. Yoshida, reminded me of when I was 22, living in Japan, and my Japanese boss forbid me from visiting my sister in Chengdu, China, over the Christmas holidays. I had already bought my ferry ticket. The teachers in the junior college where we taught had said they'd cover me for the few days I'd need to take off. It was all about power to him--I hadn't asked his permission. Those first few months in Japan were hard on me, and I was desperate to see my sister.

This man who had recruited me to work as a teacher, Hiroshi, was a rarity in Japan: a dishonest businessman, but that's another story. I told him I was going to go to China anyway. Voices were raised. I'm sure I was the talk of the school office for some time after that!

He didn't fire me. He couldn't risk that. But he never spoke to me again for the rest of the year, which was just fine with me! He had a "kohai" (junior), Robert, who was much more likable...and he dealt with me from there on out.

But back to the movie. I loved Juana's energy and feisty spirit, determined to make a better life for herself, her daughter, and her father. And unwilling to let a traditional, sexist man get in her way! 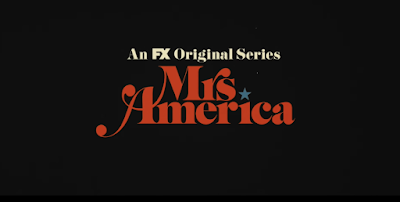 Newly on Hulu, Mrs. America is about the fight to pass the ERA in the early 1970s. With an exemplary cast of Cate Blanchett, Uzo Aduba, Tracy Ullman, Elizabeth Banks, Sarah Paulson, Rose Byrne, Jeanne Tripplehorn, John Slattery, Margo Martindale, and more, the movie presents the backdrop of the feminist movement and the rise of the Stop ERA resistance led by Phyllis Schlafly, played wonderfully by Cate Blanchett.

My Schlafly moment was when she came to Pacific Lutheran University in 1983 to debate Eleanor Smeal, then president of the National Organization for Women. I wrote about this experience in 2008, when her supporters descended on me after they saw me cheering for Smeal. They tried to convince this 19-year-old that feminists were all lesbians, "promoted" abortion, and hated men. As you might have guessed, they didn't convince me.

I find it scandalous that we still don't have an Equal Rights Amendment, thanks to Schlafly and her desperate housewives. I find it especially interesting that Schlafly herself was highly educated with a master's degree and law degree, and she ran for office a few times as well. She didn't seem to think her traditional views should apply to her own life. She was an extremely bright and capable woman, and Mrs. America seems to suggest that she decided to make opposing the ERA her cause because she wasn't getting enough traction for her hawkish views. 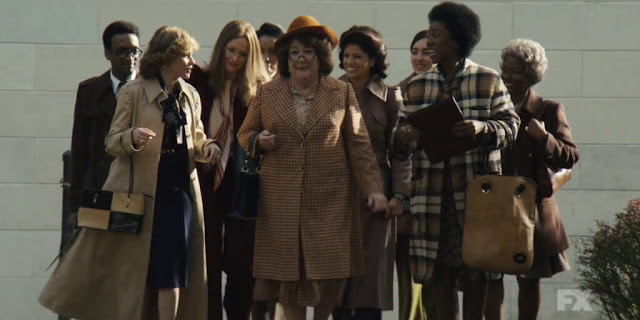 Each episode centers on a different character...so far Schlafly, Gloria Steinem, and Shirley Chisholm. Uzo Aduba is one of the best things about this show, as is her portrayal of Chisholm. Of course I knew that Shirley Chisholm was the first woman--AND Black--presidential candidate, but rarely have we seen her portrayed on film. Many young people don't even know who this trailblazer was, so I'm glad to see her story told. Seeing Bella Abzug and others try to convince her to step down and make way for George McGovern reminded me of the pressures Elizabeth Warren faced to stop her own campaign. When will women no longer be asked to step aside for men, I wonder? I hope in my lifetime!