Celebrating the wonder of Brian Doyle 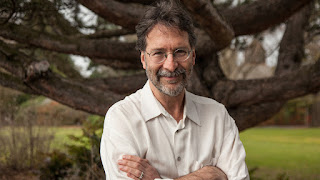 Brian Doyle was a prolific and gifted writer, editor, philosopher, father and husband, friend, and prophet who expired from this world far too soon.

The first time I met him was at the Wild Arts festival when I bought one of his books for my dad, called Spirited Men: Story, Soul and Substance. He struck me as a bit quirky and sarcastic, probably bored out of his gourd in the book signing room while all the bird lovers seemed to be more interested in the avian arts and crafts. I wasn't sure how I felt about him...he left me a bit off balance. 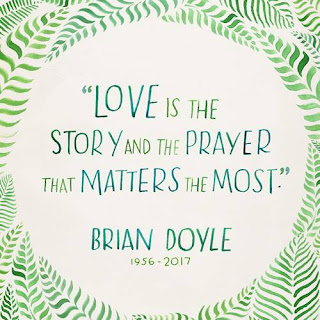 The second time I met him was at the Search for Meaning book festival in Seattle, after I heard him read from his book A Book of Uncommon Prayer: 100 Celebrations of the Miracle & Muddle of the Ordinary, when he had a packed lecture hall laughing until we peed our pants a little, wiping away tears from our eyes, and singing Amazing Grace a capella in perfect harmony. He wept freely as he recounted the friends he lost in the World Trade Center on 9/11 and read his gorgeous tribute to those victims, "Leap." In a culture that rabidly suppresses and insults male vulnerability and emotion (with homophobia at its roots), BD (as his friends call him) did not fear going deep and sensitive, regularly baring his soul raw to audiences far and wide, both in his writing and his speaking. He felt, loved, and lived with a wonder and a passion that was unparalleled and freely expressed. I loved the experience and had to buy his book.

This entailed waiting in a long line that moved like hard honey, because BD had a significant conversation with every person before he signed their books. By the time I reached him, I had read several of the poem-prayers, and I'd found the Prayer for Editors and Proofreaders. I told him how much I liked it, and we fist bumped. 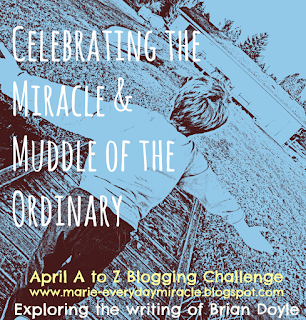 A few months later I decided I wanted to feature BD's uncommon prayers in the April A to Z blog challenge. I emailed him to ask his permission, and he responded by connecting me with his publicist, who gave permission as long as I included a link to Broadway Books, BD's favorite local bookstore. Of course, I obliged. And so I began a month of reading his poems every day and writing about what they meant to me. You can access all those posts here.

Late last year I read that BD had been diagnosed with a brain tumor. His response was to tell people he wants people to keep laughing.

“I’ll hear all laughter,” Doyle said. “Be tender to each other. Be more tender than you were yesterday, that’s what I would like. You want to help me? Be tender and laugh.” 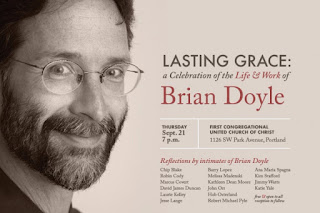 That's what happened a few weeks ago, at the incredible celebration of his life. Packed into the First Congregational Church downtown, we and 700 of BD's closest friends, family, coworkers, and admirers paid tribute. Seventeen of his friends, including well-known Portland writers Kim Stafford, Robin Cody, and David James Duncan spoke for roughly 5 minutes each, telling hilarious anecdotes and touching stories about BD. Broadway Books sold Doyle's books in the back of the church. We laughed and we cried.

We were wowed by Seattle firefighter Jimmy Watts, who was clearly not a public speaker. He'd met Doyle through the shared experience of having a child with heart disease, a friendship I can relate to. He shared a letter he wrote to Doyle about the worn T-shirt he was sending him, offering him hope and courage in his last few months of illness. “You’ve always been a firefighter, Brian” he said.

BD's brother shared an intimate email, in which Doyle exhorted his brother Peter to stop ragging on him for exaggeration and taking the opportunity to expand on truths, not always being entirely accurate. And author David James Duncan (The River Why, The Brothers K, etc.) went last. He spoke of his intimate, brotherly, loving friendship with Doyle, and I was struck and saddened by (1) his deep loss and (2) how rarely men speak of each other in such terms.

Mike and I had to work wonders to get there that evening, but I was so glad we made the effort. Afterwards, we went to the Fulton Pub (BD's favorite watering hole) with our dear friends Catherine and Brad to toast this amazing man and prophet. They drank some Jameson's whisky in his honor. It felt right and proper to honor Brian Doyle with good food and drink and sacred friendship. This literary, holy evening made me realize I need to read Brian Doyle regularly as a spiritual practice. His writing resonates deeply in my soul.

And I leave you with this: his "Last Prayer," which he published just a few years before he died, in his Book of Uncommon Prayer:

And You and I both remember that doctor in Boston saying polite but businesslike that we would not have children but then came three children fast and furious! And no man ever had better friends, and no man ever had a happier childhood and wilder brothers and a sweeter sister, and I was that rare guy who not only loved but liked his parents and loved sitting and drinking tea and listening to them!

And You let me write some books that weren't half bad, and I got to have a career that actually no kidding helped some kids wake up to their best selves, and no one ever laughed more at the ocean of hilarious things in this world, or gaped more in astonishment at the wealth of miracles everywhere every moment.

I could complain a little right here about the long years of back pain and the occasional awful heartbreak, but Lord, those things were infinitesimal against the slather of gifts You gave mere me, a muddle of a man, so often selfish and small.

But no man was ever more grateful for Your profligate generosity, and here at the very end, here in my last lines, I close my eyes and weep with joy that I was alive, and blessed beyond measure, and might well be headed back home to the incomprehensible Love from which I came, mewling, many years ago.

But hey, listen, can I ask one last favor? If I am sent back for another life, can I meet my lovely bride again? In whatever form? Could we be hawks, or otters maybe? And can we have the same kids again if possible?

And if I get one friend again, can I have my buddy Pete? He was a huge guy in this life--make him the biggest otter ever, and I'll know him right away, okay? Thanks, Boss.

Thanks from the bottom of my heart. See You soon. Remember--otters. Otters rule. And so: amen.

You can read other accounts of Doyle's life here:

A remembrance to and for Brian Doyle in the Catholic Sentinel, written by a friend's sister, an English teacher at St. Mary's Academy

The Story Catcher in the Notre Dame Magazine

The Salt Seas of the Heart, a beautiful collection of favorite BD stories from The Sun magazine

Rest in peace, Firefighter Doyle. You will be remembered with laughter. 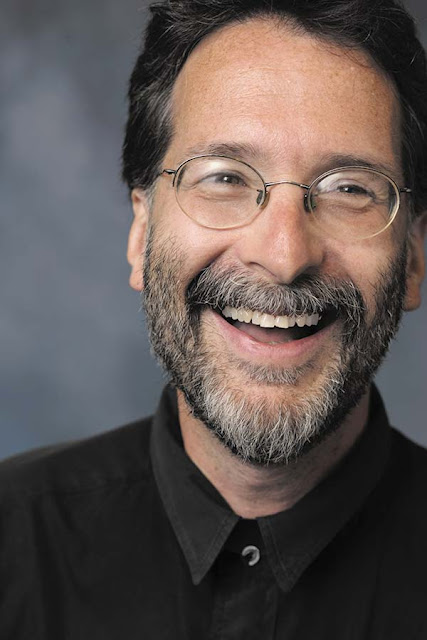