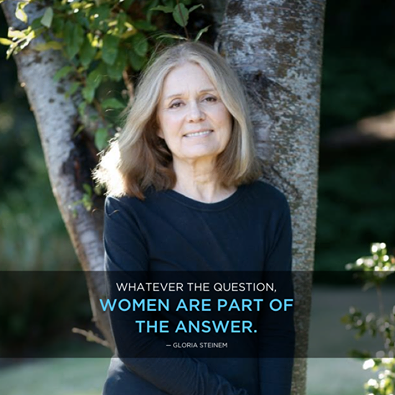 Major news publications are full of articles about Gloria Steinem today, such as Ms. Magazine's "25 Reasons We Love Gloria Steinem" and the Huffington Post's "21 Ways Gloria Steinem Taught Us to Be Better Women." She has aged incredibly well, which is probably a complicated compliment for her, as described in Jezebel's "Gloria Steinem at 80: She Looks Good and Everyone Wants Her to Know It."

She is a visionary, having written about gay marriage and other utopican feminist ideals back in 1970, and she actively supports younger feminists and wannabes (even defending Miley Cyrus). She's been accused of not supporting transgender people in the 1970s, but in 2013 she clarified her comments and expressed unequivocal support for trans folks.  She's always been an inspiration to this 49-year-old feminist, and I'm grateful for her life and her work!