The other day I was delighted to see on More Magazine's Facebook page an interview with one of my favorite musicians, Dar Williams. I've been a Dar fan ever since I heard her singing with Joan Baez on Joan's album, "Ring Them Bells

," and we try to go to her concerts each time she visits Portland.

Dar speaks about her baptism of fire experience at the Lilith Fair and the mentoring she received from Joan Baez. And now she has become the mentor.

Dar wrote a beautiful song about aging when she was just 25 years old. Now, 19 years later, she is living the song, and she's become the "woman of voices" in the song.

"The woman of voices is the one who doesn’t throw away anything, who keeps what’s important—there’s a real beauty and elegance to that that you just don’t have when you are younger, " says Dar. "That’s what I anticipated when I wrote that song and that is what I am experiencing now, so it’s nice to know it wasn’t BS."

If you haven't heard this song yet, I encourage you to watch this video:

Even though we spent a day in Astoria over spring break (in March), we decided to return for another visit last week--on Christopher's 15th birthday no less. Chris had a hankering for the Wet Dog Cafe again.
First we started off the day at Fort Clatsop--we all had a strong feeling that the "cousins" would love the fort like our kids did, and Kieran and Nick were anxious to share their Lewis & Clark reenactments. Much to Nick's dismay, they had dismantled the "try-on-the-Lewis & Clark-costumes" exhibit, but never fear! Nick had brought along his trusty coonskin cap (with a firefighter coat), so all was not lost!

The fort had far more activities going on because of the summer season. Fun, fun, fun for kids!! 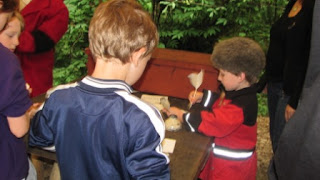 At 1:00, we attended a demonstration of tools and weapons led by this highly engaging park ranger, dressed in period gear. He taught elementary school for 30 years, and that was not surprising! He asked for volunteers and no surprise--Kieran was chosen. 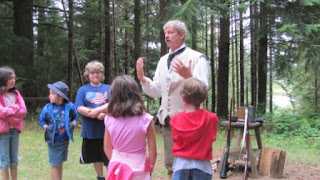 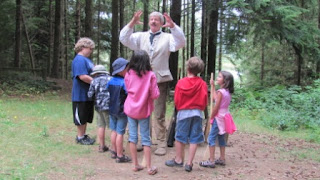 After the kids had fun pretending to shoot the offending grizzly, the ranger and an assistant actually demonstrated the firing of a period rifle. Very exciting!

Then it was off to lunch at the Wet Dog Cafe, where Chris wisely did not order the insanely spicy "Hot Chicks" burger and was able to enjoy his food much more! Again I had the grilled halibut burger and again I loved it. The waiter brought a birthday sundae, too!
Then we walked along the Astoria waterfront. While we were at lunch, the skies miraculously cleared up and the sun came out. Hooray! 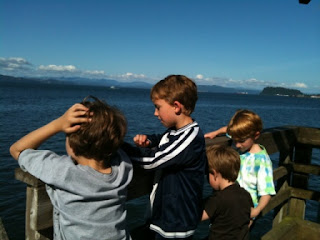 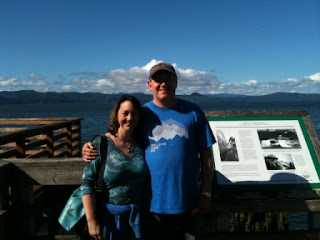 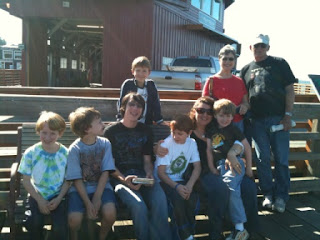 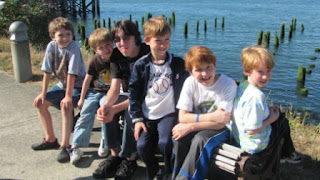 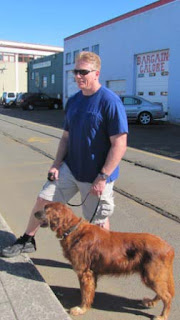 While hanging out on the waterfront, we could see the Astoria Column up on the top of the hill. According to my Mapquest, it was less than 2 miles away (but all uphill). We told the kids that we were going to hike all the way up there. Interesting, because my kids believed their aunt, and her kids believed me. I guess they thought that aunts never lie!! They were quite relieved when we told them we would be driving. And they didn't appreciate our little joke--imagine!

Apparently, my parents took us to the column when we were kids, but I had no memory of it. It was amazing, and I highly recommend the trip for anyone who visits Astoria and is lucky to have a clear day. (The city was clouded over in March.) 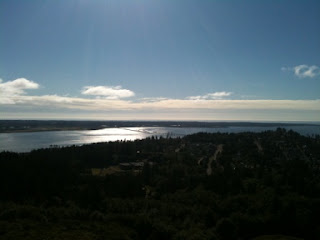 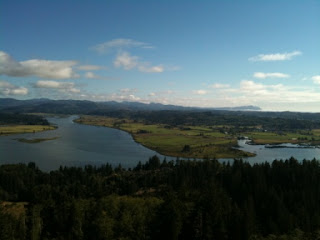 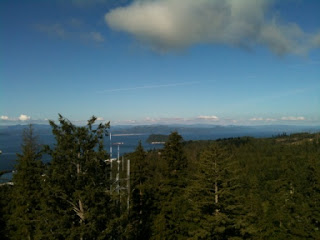 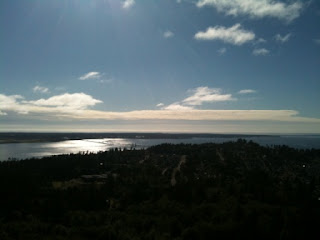 You can purchase gliders and fly them off the top. Kieran caught a few as they came down!

After leaving the column, we did a bit of shopping for birthday cake at the Warrenton Costco (which I love--no one was there!!!) and stopped by the Carter's Outlet in Seaside.

Two kids raised in a $1.5 million home in the Chicago suburbs sued their mother, Kimberly Garrity, for not spoiling them rotten during their childhoods. Their attorney father, Steven A. Miner, was one of three lawyers representing Steven II (23) and Kathryn (20) in the $50,000 lawsuit. Their "bad mothering" lawsuit against their mother includes such horrific accusations ("emotional distress") such as:
Last week, after two years of litigation, an Illinois appeals court dismissed the case, finding that the mother's conduct was neither extreme nor outrageous. To rule in favor of her children "could potentially open the floodgates to subject family child rearing to … excessive judicial scrutiny and interference."

Bottom line is it is one effective way to embarass their mother and stick her for the legal fees, while they do not have to pay their father's fees. I'm sure they're not hurting for money if they grew up in a $1.5 million home. I won't even go into the number of frivolous lawsuits filed in this country...and the fact they were allowed to bring this case to court, wasting Illinois taxpayers' money.

Instead of embarassing their mother, these two young people have stained their own reputations by leaving an internet trail showing that they are spoiled, overprivileged brats.

Fair Trade S'mores on the Beach

We enjoyed our campfires and s'mores so much that we had two evening campfires during 5 nights at the beach.


The second night we had an AMAZING sunset as our backdrop, and the evening was quite a bit warmer (shorts weather). 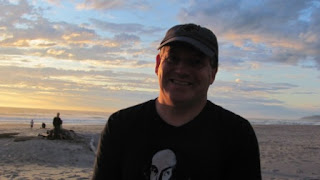 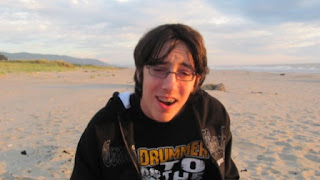 We were so glad my mom was able to stay all week at the beach. She had a scare one morning when her heart went back into atrial fibrillation. They called her cardiologist and made plans for her to have an EKG that day. They packed up all their stuff and drove to our rented house to let us know (since we didn't have cell phone coverage where we were). Once they arrived, Nadine took her heart rate, and it was back to normal! I've said it before and I'll say it again...I'm so glad to have a doctor in the family!


If you like our signs, you can download one for yourself here--at the Raise the Bar Hershey site. 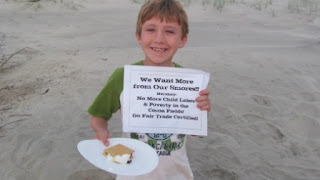 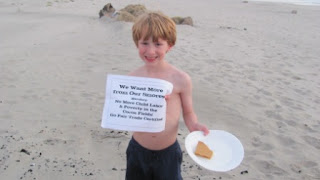 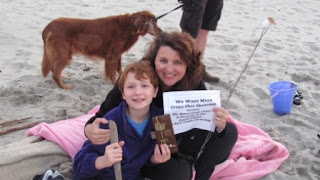 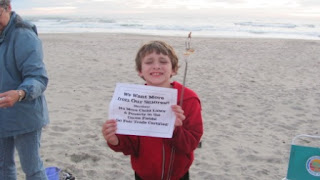 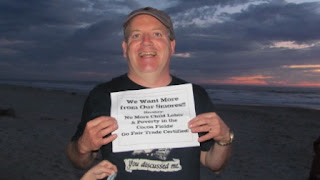 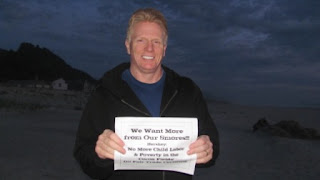 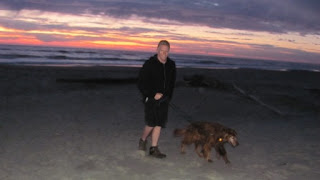 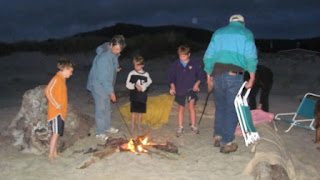 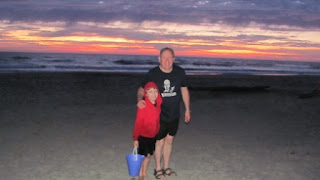 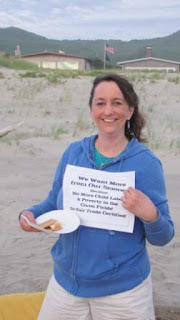 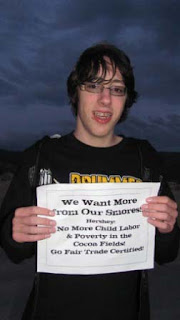 Please spread the word about the chocolate industry and its very bad practices of using child slaves to produce the chocolate so many people love! You can easily purchase fair trade chocolate at Trader Joe's, Fred Meyer, Whole Foods, and many other places. And it tastes delicious!
Posted by Marie at 2:19 PM No comments: