With my heart in San Francisco--Day 1

I am very behind on my blogging! Last weekend Mike and I had a fantastic three-night getaway to San Francisco to celebrate our 20th wedding anniversary. We stayed in the English Garden Room at the delightful Union Street Inn, which is the #1-rated San Francisco bed and breakfast on TripAdvisor.com, for good reason. I realize that many people are not fans of B&Bs, but we find them to be much more charming than hotels (especially when they have en suite bathrooms!). It was a perfect choice for our anniversary trip. 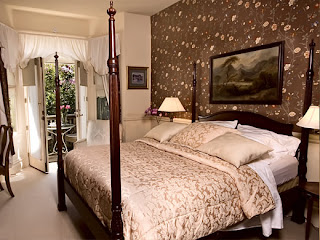 We arrived on Wednesday afternoon, hungry, so we set off for the Balboa Cafe, a few blocks from the inn. It's "one of the oldest saloons in San Francisco" and had real old-world charm. The service was less than desirable, though. Mike had a lovely salad with perfectly seared rare ahi tuna, and I had a salad with raisins and pecans (with absolutely nary a pecan anywhere, and the waitress never asked about our meals). I was underwhelmed...but we were happy to be together, starting out our trip. 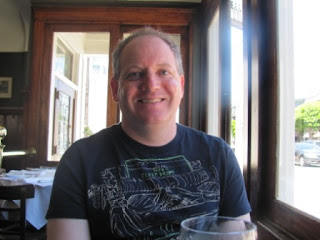 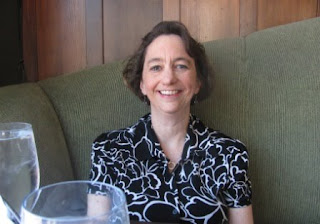 Next we embarked on a walking tour of the lovely and historic North Beach (San Francisco's Little Italy), which abuts right against Chinatown. In fact, we took a wrong turn off our tour only to find ourselves in Chinatown. The tour started with this beautiful Catholic church, filled with Italian marble and artwork. I took only a few photos without my flash, wanting to be respectful and all, but if you click on the link above you can see what I mean about the artwork. Amazing. It had all sorts of little chapels filled with kitschy statues--I had to chuckle at all the nuns at the feet of Jesus (like there were nuns in Jesus' time?).
Clearly, this church is conservative, even by Catholic standards--take a look at this newsletter from 2007, specifically "From the Pastor's Desk."
I glanced at a brochure targeted to gays and lesbians, about a group that seeks to convince them to embrace a life of chastity. I imagine those conservative Catholics in San Francisco must think they are living in a den of iniquity! At any rate, I did think the church was beautiful (if you can avoid its politics): 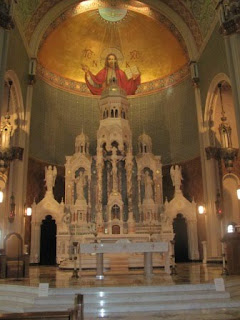 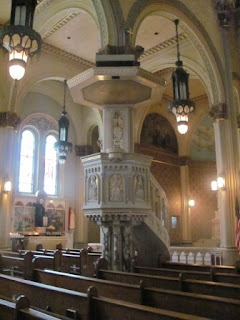 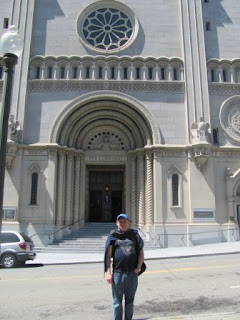 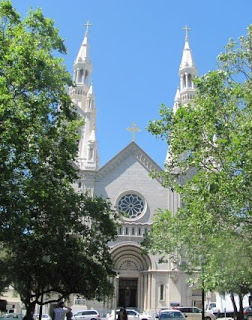 From conservative Catholicism to the seat of obscenity! The next building we visited (one of our favorites in the city) was the wonderful City Lights Bookstore, which is also a publishing house and earned fame for publishing Allan Ginsberg's collection of controversial poems, Howl. It has an entire floor dedicated to poetry and beat literature, and its literature collection is divided up into interesting, ecletic categories. It's the perfect store for two old English majors, and we could have stayed there all day.
I knew Mike would be happily browsing for hours, so I found a copy of Tales of the City, which I was 3/4 of the way through, pulled up a chair, and finished reading the book! 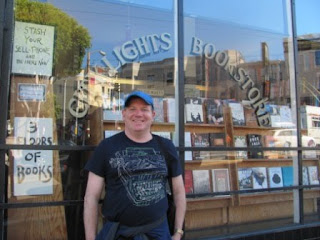 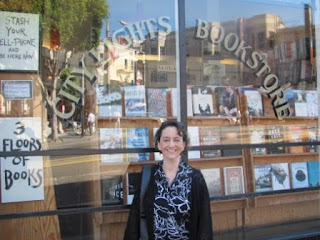 Next we continued our meandering, checking out historical buildings and points of interest and admiring the aesthetically interesting TransAmerica pyramid: 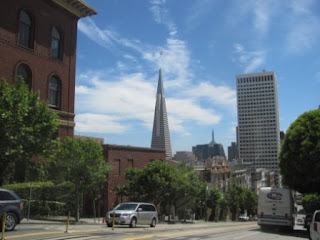 Here it is couched between two of the buildings that survived the 1906 earthquake and fire: 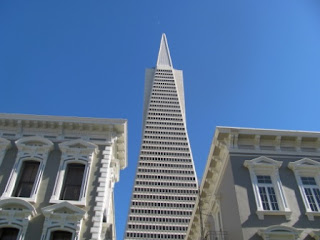 Next we had dinner in the Mona Lisa restaurant, which we chose because of its 20+ varieties of risotto on the menu.
Since Mike and I both have wheat sensitivities to varying degrees, Italian is not our first choice as far as restaurants go. (And truth be told, we prefer Asian food!) Mike had the Risotto allo Scoglio (white wine sauce with clams, calamari, prawns and mussels) and I had the Chicken San Francisco (white wine sauce, garlic, fresh tomatoes, black olives & artichokes). Both were oishi, as they say in Japanese. Here's to 20 years! 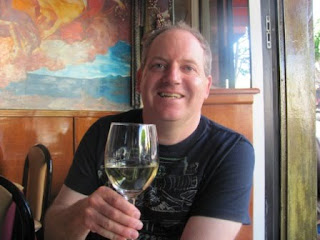 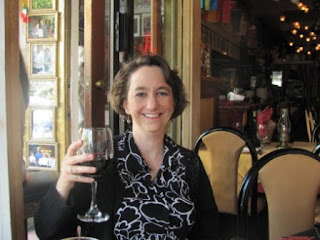 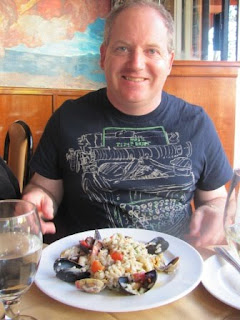 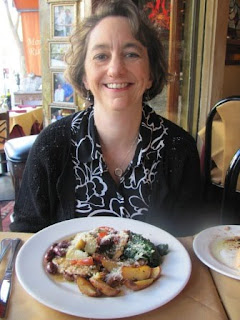 After dinner we went to stand in line for "Beach Blanket Babylon." It's the longest-running musical revue in theater history, and a hilarious, madcap romp through pop culture, politics, and fairy tales...all with incredibly zany hats and camp singing and dancing. Great fun, and a wonderful introduction to San Francisco!
Posted by Marie at 5:00 PM