My heart in San Francisco--final chapter

We began our third day in San Francisco by taking a tour of Alcatraz (after having scrambled eggs and smoked salmon for breakfast in the garden). I had toured Alcatraz once when I was in college and remembered enjoying the tour. Part of the fun is the boat ride across the bay: 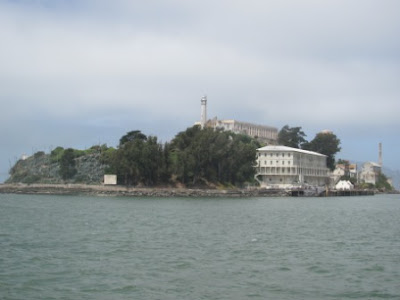 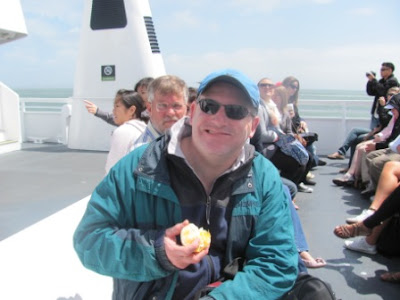 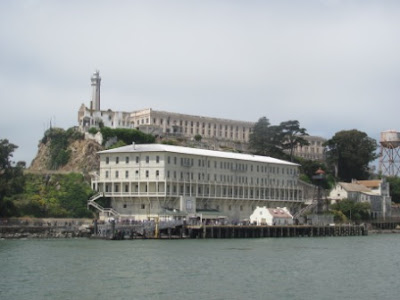 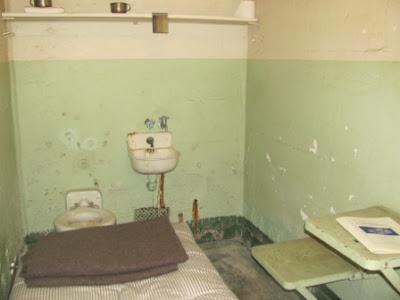 The cell blocks--rows and rows of tiny cubicles, with just a bit of sunlight from above: 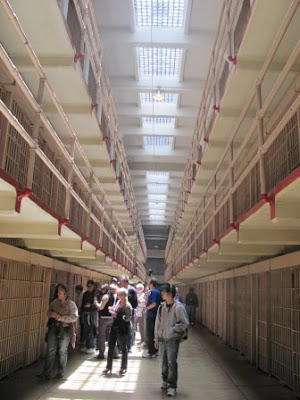 Alcatraz admission comes with a self-guided audio tour of the cell blocks, narrated by former inmates and guards. Fascinating history. 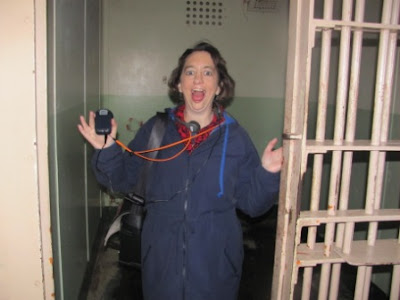 Mike with his "The Shining" Jack Nicholson impression: 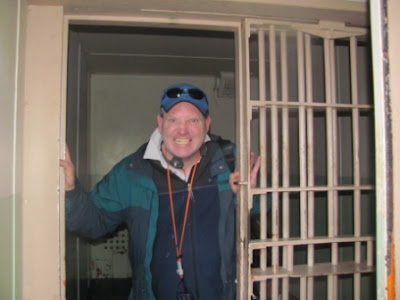 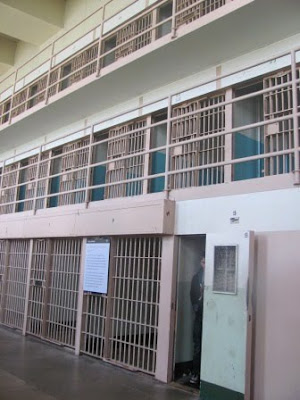 Apparently the worst part about staying at Alcatraz was when the prisoners got to go outside and saw this incredible view--they truly knew what they were missing: 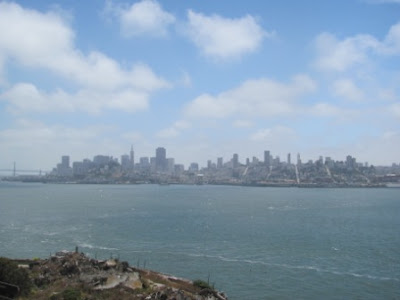 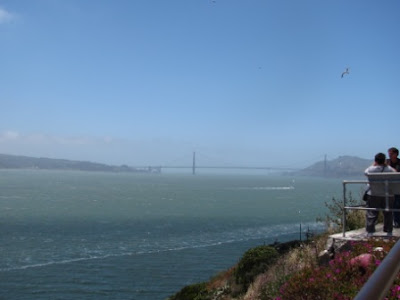 Apparently Native Americans occupied Alcatraz in the 1960s as a form of protest. 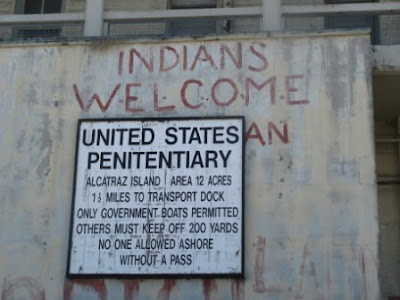 Mike was interested to learn that Alcatraz Prison closed for good on the day he was born. On the boat ride back to the city: 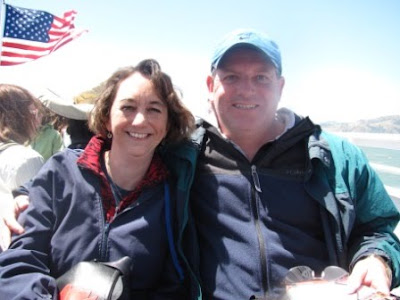 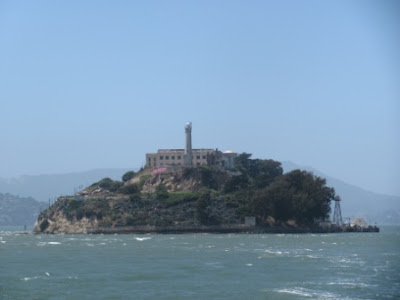 And approaching the city: 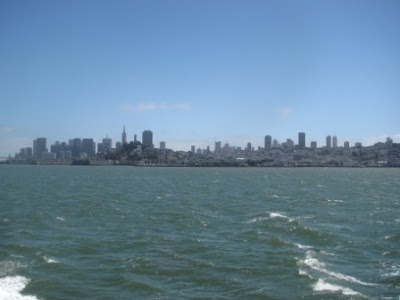 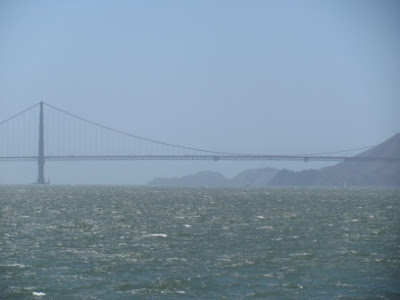 Next we took a walking tour through the pretty and quiet Marina District (one of the most hard-hit areas in the last earthquake, because much of it was built on a landfill) and then took a roundabout bus/train journey to Golden Gate Park, and then wandered around until we found the Conservatory of Flowers. Unfortunately it was nearly 4:00 by then, closing time! Instead we returned to the small Japanese garden (which we've been to before): 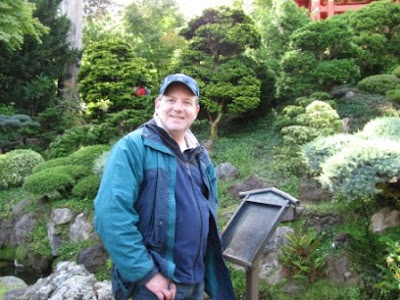 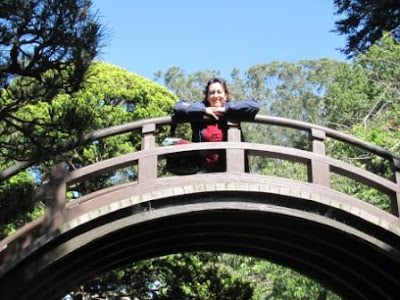 I told Mike that this was the first Buddha statue I'd ever seen--when I was a kid and we toured the Japanese Garden. The first of many to come, I should add, after living in Japan and touring throughout Asia. 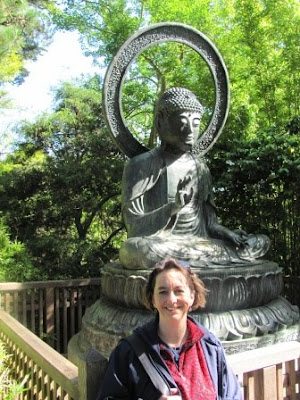 We returned to our inn again for the wine and cheese reception, where we heard some entertaining stories from one of the innkeepers, David, who used to be the chef for the Duke and Duchess of Bedford.

Then we had dinner at a trendy restaurant a few blocks from the inn, Betelnut, where we had sake, a lovely beet salad (and I'm not a big beet fan), and two different curries--one from Malaysia and one from Sri Lanka. Then we retired to the inn to read in our room--and Mike promptly fell asleep by 9:30 p.m. That's what happens when you're fortysomething! I stayed up until 11:00, immersed in The Girl with the Dragon Tattoo. 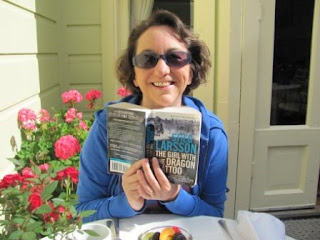 Enjoying our last breakfast in the garden--french toast. The breakfast chef, Jane (and other innkeeper) had bought gluten-free bread for Mike! 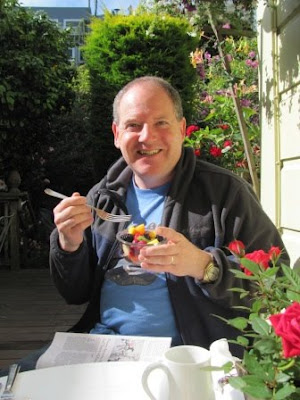 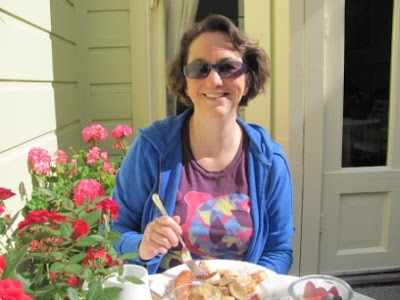 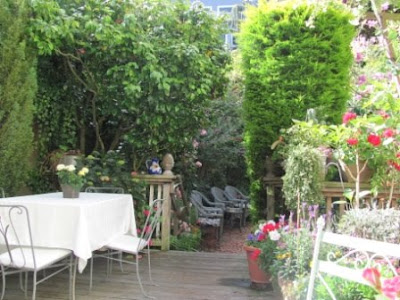 My anniversary present was a mani/pedi at the nail salon near the inn. I don't do that kind of thing very often, and of course as soon as I left the salon and went back to the inn to gather up our things, I'd ruined my fingernails and had to return for a touch-up! Mike had a neck and foot massage while I was getting my nails attended to. 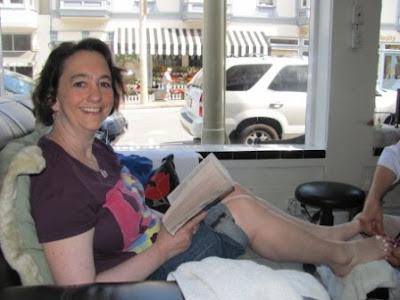 Leaving the inn--sigh--in the parlor: 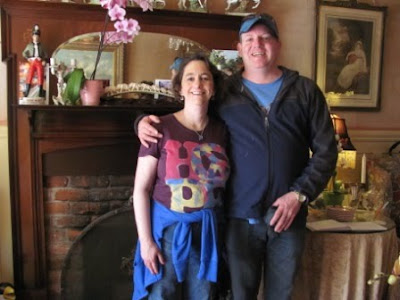 And in the garden: 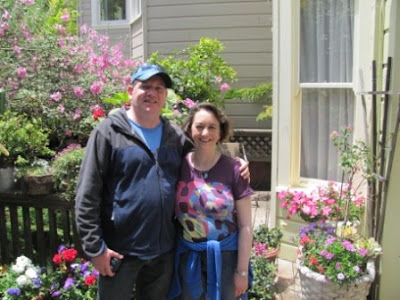 We wandered around the neighborhood before setting off for the airport via bus and BART. It's quite easy to take mass transit to the airport, but what we didn't realize was that the airport BART only runs hourly on the weekends. Our flight was slightly delayed, fortunately; otherwise it could have been very, very close getting to the airport on time!!
The boys were glad to see us, but they had a great time with their grandparents. We are very, very lucky to have them living in the same town and willing to watch the kids for us. Thanks, Mom and Dad!!! Best anniversary present ever!
Posted by Marie at 6:19 PM