"I'm so glad that you finally made it here...With the things you know now, that only time could tell...Looking back, seeing far, landing right where we are...And oh, you're aging, oh, and I am aging, oh, aren't we aging well?"
--Dar Williams
My amazing mother turned 70 today. Mom was born in 1940, a wonderful surprise to her parents whose other children were already 14 and 16. Consequently, she had the attention bestowed on an only child, but she straddled the ages of her siblings--and soon nieces and nephews. 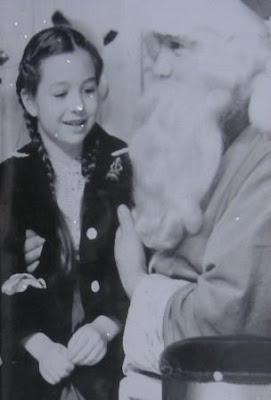 Her dad was hard working, opinionated, and funny, and her mom had a phenomenal green thumb, was kind, and cooked a tuna casserole with filberts (before they were fashionable and called hazelnuts!). After growing up in Oregon City, Mom went to Pacific Lutheran College (now PLU), where they were forbidden from dancing and girls wearing pants (among other things). These restrictions did not stop her from meeting and dating my very shy-at-the-time father. 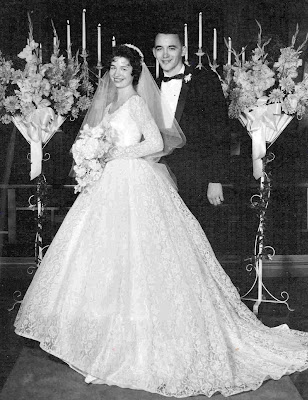 They married after graduation and went off to live in Germany, where my dad was teaching in an army school. (Mom couldn't use her teaching degree at the time, because the army forbid spouses both working.) They lived in Germany and traveled throughout Europe before returning home to anticipate my arrival. She did some substitute teaching while pregnant and when I was a baby, before retiring from teaching to raise a family.

Mom contracted German Measles when she was pregnant, so she didn't know whether I would be seriously retarded or blind or have some other serious birth defect. When I was born with a cleft lip and palate, along with a club foot, the doctor would not show me to her at first because he wanted to warn her...but I'm sure he didn't expect her delighted response. She tells me that she was just so grateful that my birth defects could be repaired. I cannot begin to tell you how that makes my eyes fill up, knowing that as an "unperfect" baby, my parents welcomed me into the world unconditionally and full of love. They had to see me go through multiple surgeries and hospital stays as a baby and child, in addition to having to force a screaming toddler to either insert or remove a speech appliance from her mouth (which I thought was an instrument of torture!). When we had our own "fragile child" scenario, I had an ever greater sense of gratitude and empathy for what my parents must have gone through. 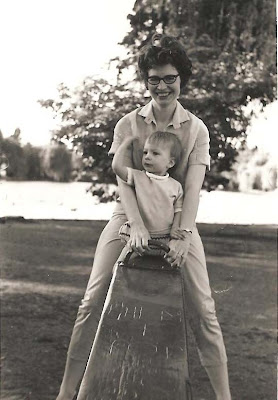 As the primary caregiver, Mom was always there to answer questions honestly and guide us through life in a gentle way. I remember the first time I asked her about sex in fourth grade--some girls at school had been teasing me because I didn't know the other meaning of the word "screw." I went home and asked my mom, and it was like she had been waiting for me to ask that question so she could explain it to me.

We didn't have a lot of money growing up, since we were living on my Dad's salary as a teacher and then as a social worker (after he earned his M.S.W.), and most likely they were paying off school loans as well. But I never felt lacking for anything, least of all love and affection. We camped A LOT (I never flew in an airplane until I was 20 or stayed in a nice hotel until I was 22). We ate a lot of hamburger. Mom was a creative and adventurous cook in the 1960s and 70s--we often had tacos, spaghetti, and teriyaki beef, in addition to meatloaf, liver and onions, and beef tongue (which Dad loved)! We traveled extensively, by car, staying with friends and relatives and camping. Our parents showed us the country--the only places we didn't get to (that we could drive to) were Florida, the deep south, and Texas (no thanks!).

Mom told me that God was not necessarily a male before I really took that in myself (when I went through a shocking and upsetting period after taking Feminist Theology). She taught me that I could do anything I wanted to do.

Throughout my childhood, my siblings and I experienced several things that no child should have to face, and I can't imagine how my parents must have ached to see us go through them. Because of their love and support, I feel that I am a much stronger person through these experiences. My mom is no nonsense--she doesn't wallow in depression or regret or spend a lot of time worrying (if she does, she rarely expresses it). She gets on with life and has a positive outlook, which I believe I have inherited. This is the way I believe we are most alike. (I've also picked up other traits of hers--such as sometimes speaking without thinking, disliking fake or disingenous people, and strongly disliking plastic flowers or Christmas trees). My sister and I have both inherited her sense of sometimes-overambition and perfectionism when taking on any cooking or creative task.

When I was in junior high school, Mom went back to grad school to get an M.A. in Counseling, and then began working as a mental health therapist in a psychiatric ward of a hospital. Between them, my parents have three master's degrees in addition to their bachelor's degrees, subtly reinforcing the importance of education. I also remember feeling very lucky as a girl that my reading choices were not censored (although my watching ones were, justifiably--I wasn't allowed to watch Batman as a child, and I saw my first R-rated movies, "A Star Is Born" and "Saturday Night Fever" with my mom). I must have owned THE only copy of Judy Blume's Forever in school...because my mom allowed me to read it.

After graduating from PLU, I went off to Japan for the year, and was soon followed by my sister, who left for a year in China. Neither of us had ever been out of the country before this (with the exception of Niagara Falls, Canada), but we had obviously inherited our parents' wanderlust. I never truly understood how difficult this must have been for them until I had children of my own.

They first met Mike in 1988, when they visited Japan. Then he came home to Oregon with me in summer 1988 to meet the rest of the family and some of my friends. He immediately fit in. I think my parents must have known instinctively that he was the man for me. They were never anything but completely enthusiastic about him.

Mom and Dad both retired in 1997 or 1998 (can't remember which), and they have made the most of their retirement. They've traveled throughout the world (with trips to the UK, Ireland, Scotland, New Zealand, Australia, China, Canada, Alaska, Costa Rica, and Hawaii); taken up quilting; become avid members of a very ambitious book group; gotten involved in geneaology; spent time with old friends and cultivate new ones; and taken frequent trips to their beach house in Rockaway. They are also very fit--they work out at the gym or take long walks daily. And most significant of all, they have continued to support their children with all the love and support they can. They are phenomenal grandparents, and all six boys adore them.

Mom is celebrating her birthday this weekend at the beach, with an Indian feast this evening with their wonderful friends Neal and Annette, and then tomorrow they will go off to our beloved Sylvia Beach Hotel in Newport.

Nadine and I were plotting to host a big tea party for all of mom's friends, but she has decided she'd prefer to have just the three of us spend time together instead. Next weekend we will go to Edgefield and have mom-daughter time. I can't wait! It will be the second time we've had a getaway like this--the first time was in early 2008. This is much easier now that the boys are getting older, although we truly appreciate our husbands' support in this endeavor. We will celebrate again with all the boys on Sunday.

When Mom and I have attended women-only events together, we've sometimes been greeted with surprise by other women that we actually like to spend time together! I know not everyone has a close relationship with their mom.

I feel supremely blessed to have the mother I do--and especially because I can call her my close friend, in addition to being a great mentor, coach, teacher, and mom. Happy birthday Mom! I hope that when I'm 70, I'm half as vital, dynamic, healthy, and loving as you are! I love you! 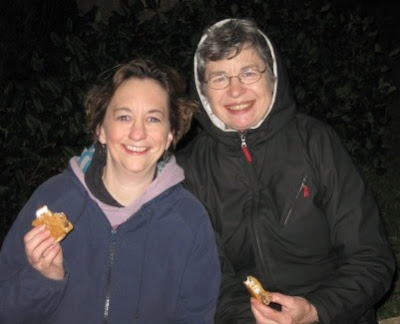 Mom and I in British Columbia, last March, eating s'mores at the campfire 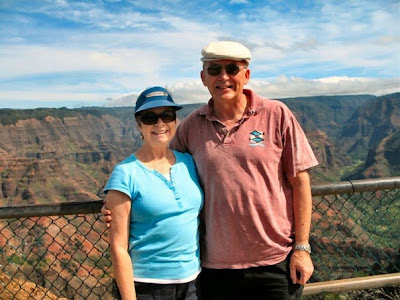 Mom and Dad in Kauai in November