We had a great time at the beach last weekend--we had uncharacteristically sunny skies (unusual for the Oregon Coast, especially in August!).

Aquarium
On Saturday we drove nearly 2 hours south to Newport to take the kids to the Oregon Coast Aquarium. We hadn't been there since Chris was little. Here is a benefit of Facebook: the day before I posted that we were going to the aquarium, and some friends of ours responded that they were planning to be there that day too! So it was fun to meet up with them and hang out for awhile. They drove all the way down from Portland to Newport, just for the day. What's unique about the Oregon Coast Aquarium is that all of the fish and sea creatures there are native to the Oregon Coast. 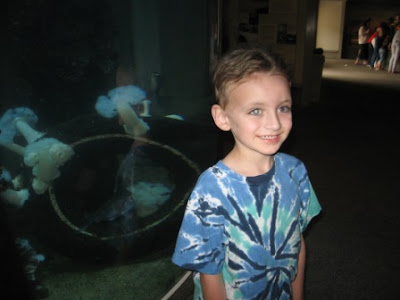 Kieran in front of some sea cucumbers (or something?) 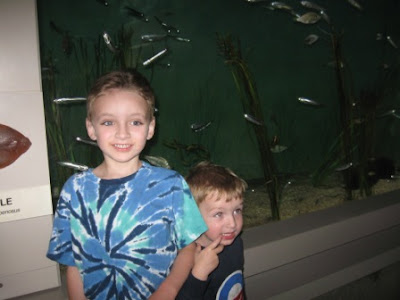 And the sardines...I really liked the sardines! They swim with their mouth open to catch organisms and plant life--take a look: 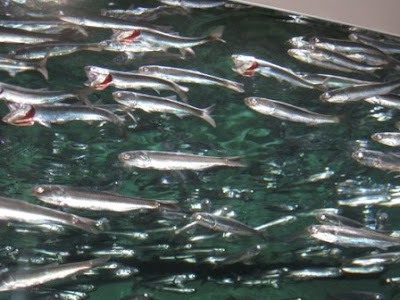 Last time we went to the aquarium I LOVED the jellyfish tank. It wasn't as spectacular as I remembered it from last time--seemed smaller and less full--but still cool: 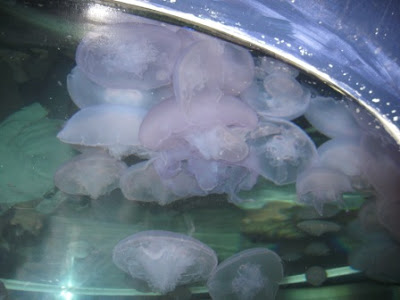 I also liked the enormous Japanese crabs--they were about as big as Nicholas!: 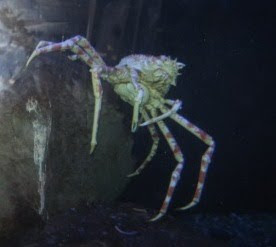 Here is Kieran sitting in one of the water tubes--see the fish underneath him? 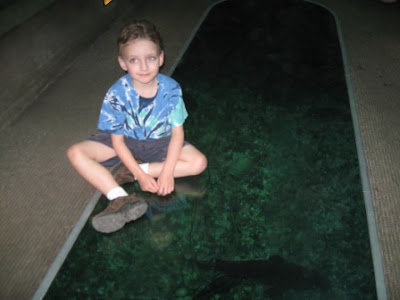 We're being swallowed by a shark! 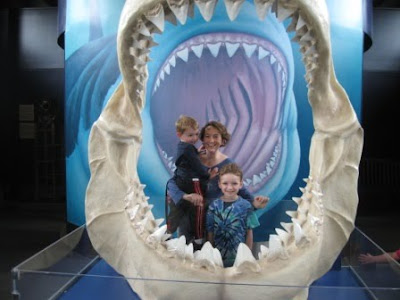 Nick doing a "show" while we are waiting for Mike and Chris to catch up with us: 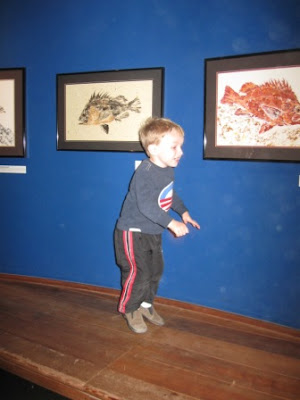 Chris with the sharks and fish: 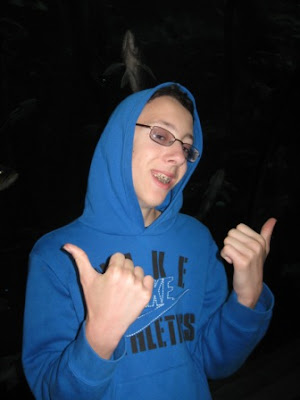 And with a diver, who attracted twice as much attention as the fish and sharks! 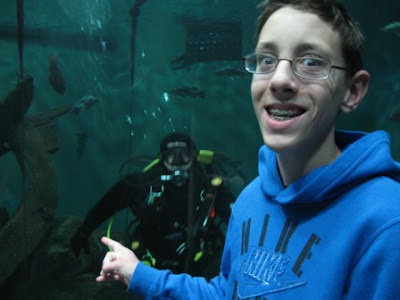 Posing in one of the tubes: 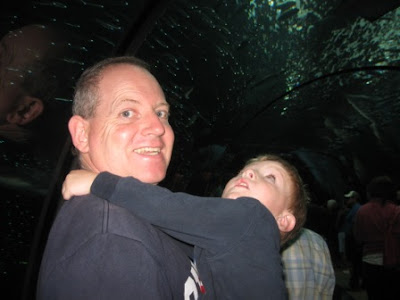 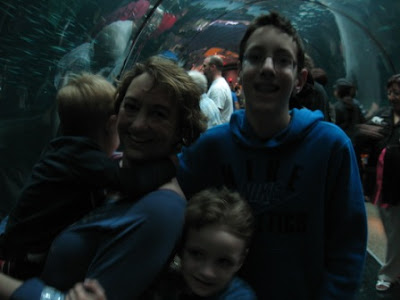 Playing in the kids' play area: 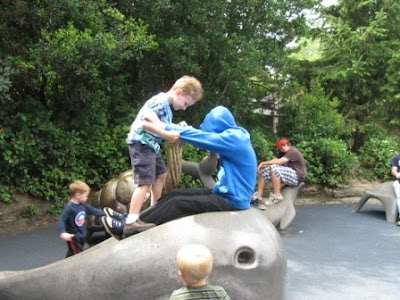 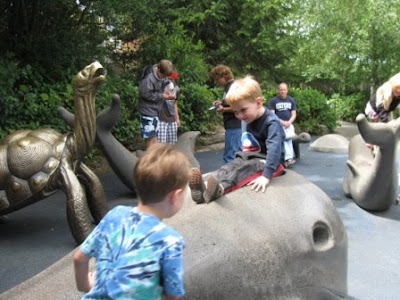 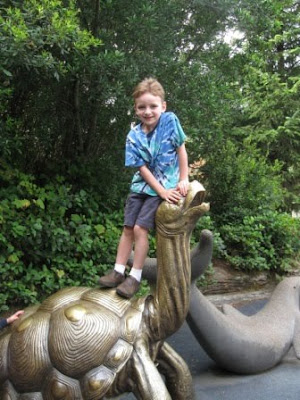 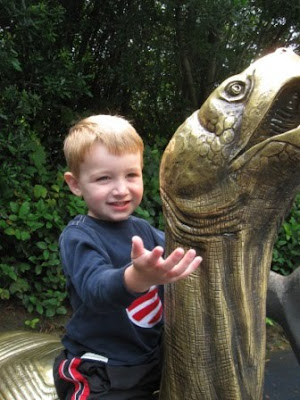 Nicholas loved these little caves and tunnels near the octopus exhibit: 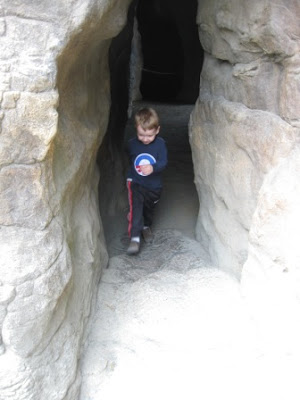 But what he loved BEST were the sea lions and seals, two of which he named "Abby" and "Dobby." Kieran loved the flattened penny machines--he spent $1.53 on three souvenir pennies!
Otis Cafe
After the aquarium, we took the kids to the Otis Cafe for dinner. Our friends joined us (sadly, I neglected to get any photos of them!)...although the place is so small, we couldn't sit together. As expected, the kids LOVED the Otis and the big portions. Both Kieran and Chris had adult-size hamburgers (with the to-die-for hash browns), and polished off their entire portions! Mike and I had the Sitka omelet and Hangtown fry (with fresh oysters) and shared with each other. 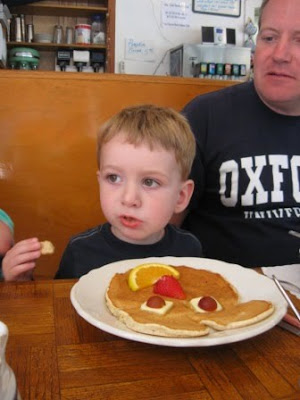 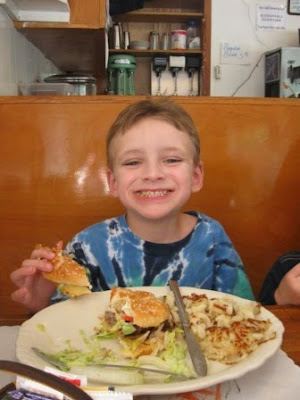 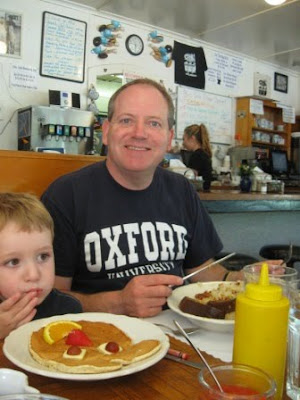 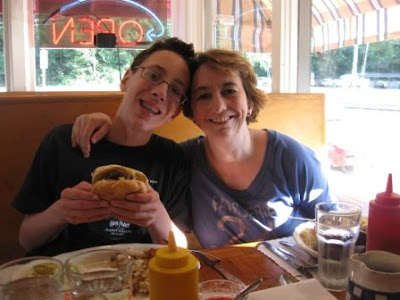 Beach Fun
We had another beautiful day on Sunday, and we spent lots of time on the beach: 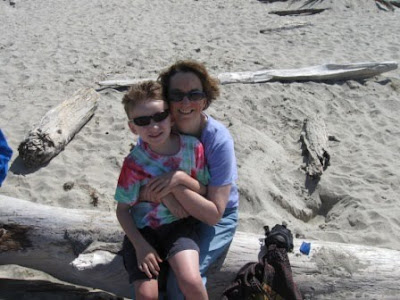 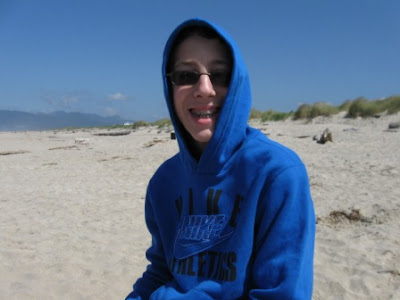 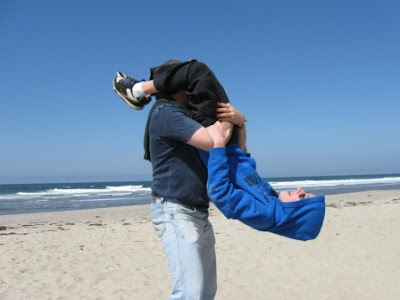 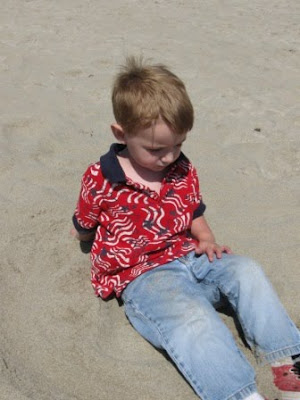 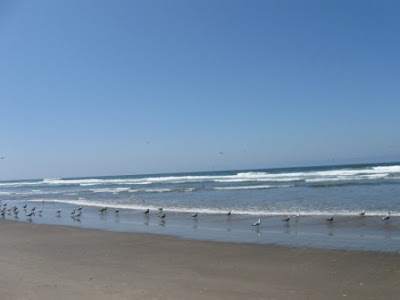 The beach was full of pelicans that day--it was really amazing! 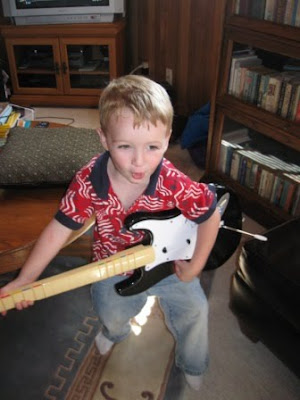 Playing Rock Band back at the beach house! 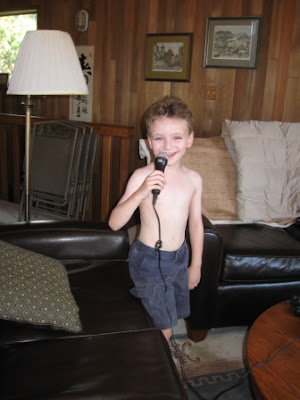 Kieran's been slicking his hair back constantly because he is pretending to be Danny Zuko from his latest obsession, "Grease"!
Posted by Marie at 11:04 PM